Thank you to all who attended the Richard C. Tolman Award Presentation. 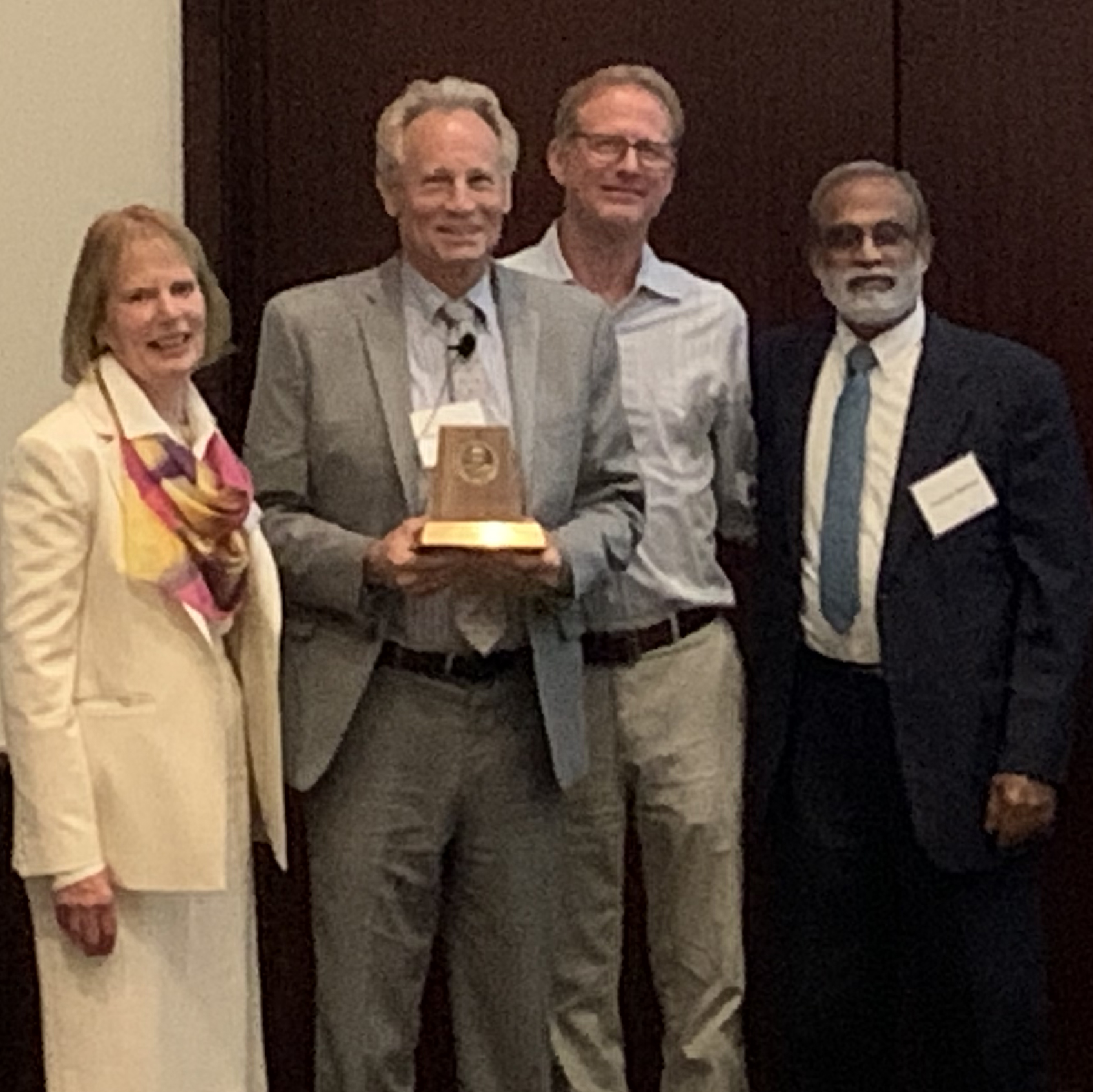 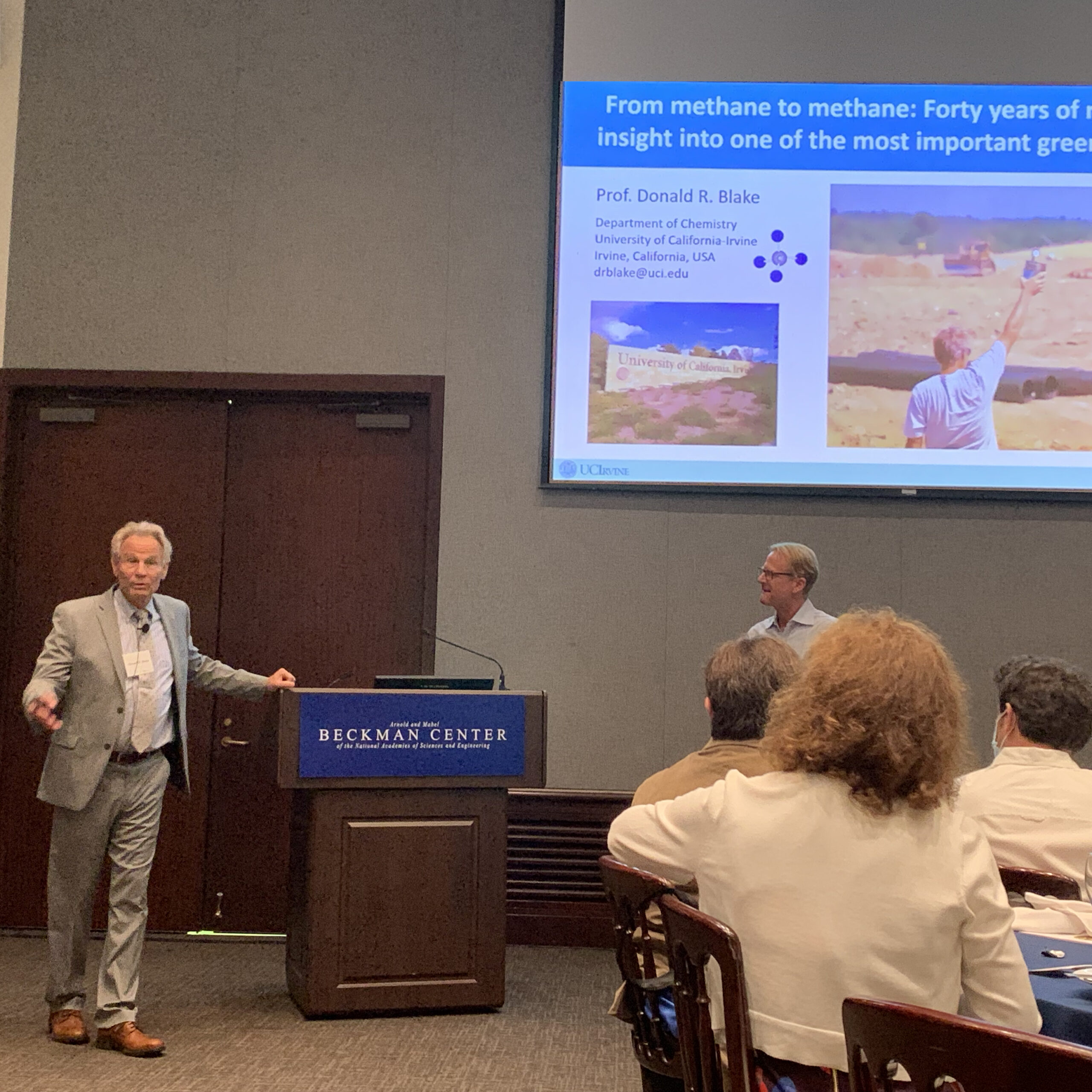 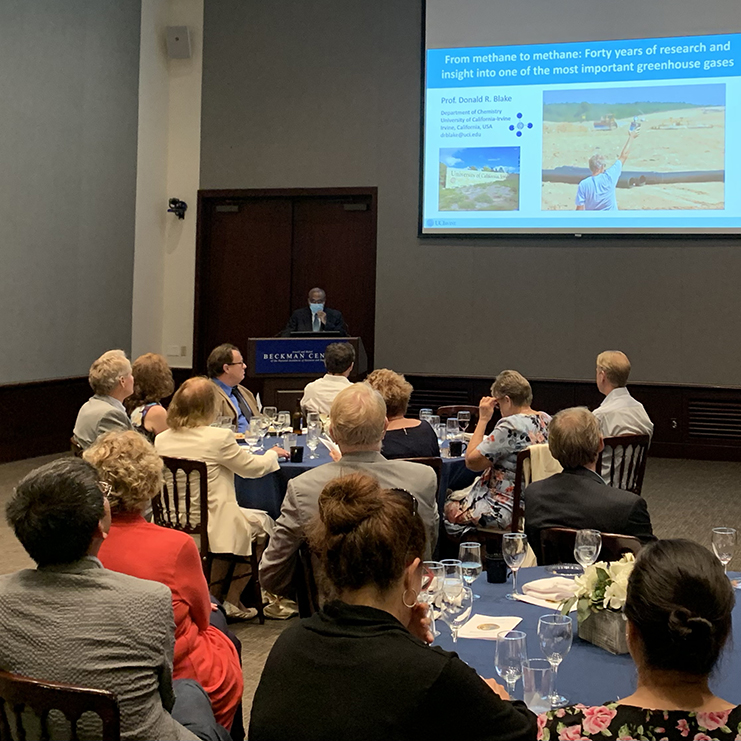 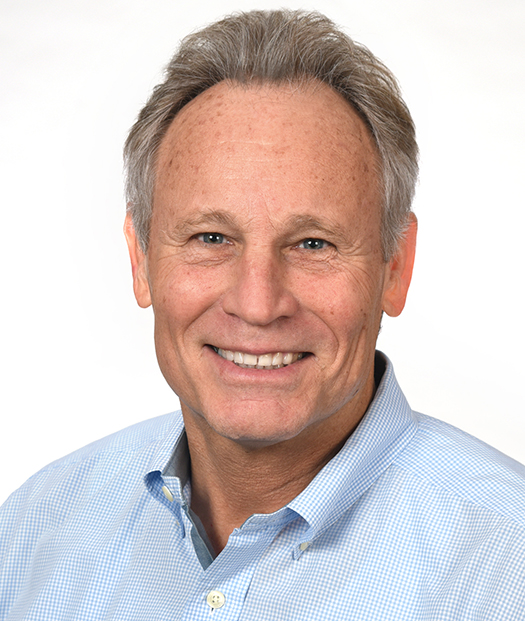 The Beckman Center is currently requiring proof of vaccination to attend events. Please present a physical or digital copy of your vaccination card.

Biography: Donald R. Blake was raised in California and served in the US Navy from 1971 to 1974. He received his BS in Chemistry from UCLA in 1978 and his Ph.D. in Chemistry from UCI in 1984. During his graduate studies, he was mentored by F. Sherwood Rowland, who received the 1995 Nobel Prize in Chemistry for co-discovering that chlorofluorocarbons deplete stratospheric ozone. Professor Blake joined the UCI faculty in 1985 and has led or co-led the Rowland-Blake group since 1998. His research focuses on atmospheric trace gases that contribute to climate change, stratospheric ozone depletion, and urban air pollution. His group has monitored global trace gas levels since the 1970s and has participated in regional NASA airborne missions since the 1990s, in which instrumented research aircraft survey atmospheric
pollution in different locations. His group also regularly studies air quality in cities around the world, with the aim of identifying specific emission sources that contribute to poor air quality. Professor Blake has received numerous research and teaching awards, including the American Chemical Society Award for Creative Advances in Environmental Science and Technology (2013) and the California Air Resources Board Haagen-Smit Clean Air Award (2014). He has published more than 600 research papers and is a Fellow of the American Association for the Advancement of Science (2008) and the American Geophysical Union (2009). He is currently a Distinguished Professor at UCI.

The Tolman Medal is awarded each year by the Southern California Section of the American Chemical Society in recognition of outstanding contributions to chemistry. These contributions may include achievements in fundamental studies; achievements in chemical technology; significant contributions to chemical education; or outstanding leadership in science on a national level. The nominee need not be a Southern California resident; however, most of the award-related accomplishments must have been made in this area.

The Southern California Section of the American Chemical Society and the Tolman Award Committee are now seeking nominations for the next award. There is no official nominating form for this award; nominations are accepted from any member of this Section or of cooperating Sections. The nomination package should include:

Nomination Packages should be electronically transmitted to the Chair of the Tolman Committee at office-at-scalacs-dot-org (preferred method). We are also deleting the requirement for copies of publications. Rather, a list of representative publications would suffice. The deadline for receipt of nominations is December 15 each year. Please submit nominations and supporting documents to:

Richard Chase Tolman, for whom the Tolman Award was named, was born March 4, 1881, in West Newton, Massachusetts. Early in his career, he demonstrated that the electron was the charge-carrying particle in metals and determined its mass, but he was known later primarily as a theorist. He was a professor of Physical Chemistry and Mathematical Physics at Caltech, and, in the words of Thomas Hager in his fine biography of Linus Pauling, in the 1920s Tolman epitomized the spirit of the graduate program: clear, critical, and focused on the cutting edge of research. Caltech had been founded in 1919, by Hale, Millikan, and Noyes. In 1922, the 21-year-old Linus Pauling came from Oregon to do graduate work in chemistry and was introduced to quantum theory by Tolman (to the Bohr-Sommerfeld theory, since this was before the introduction of wave mechanics). Tolman wrote a tome on Statistical Mechanics and taught that subject to generations of Caltech students, but he was probably best known for his masterful treatise “Relativity, Thermodynamics, and Cosmology”, the lectures which first introduced many students to tensors, as well as to some of the mysteries of general relativity. The final paragraph of that formidable work illustrates well Tolman’s style, character, and philosophy:

“It is appropriate to approach the problems of cosmology with feelings of respect for their importance, of awe for their vastness, and of exultation for the temerity of the human mind in attempting to solve them. They must be treated, however, by the detailed, critical, and dispassionate methods of a scientist.”

And that is the way those privileged to have listened to him remember him. He was a superbly organized and thoughtful lecturer, who insisted on having the lecture room to himself for the hour before his lecture. When the students arrived, the board would be covered with a neat and logical outline of his lecture. He would be sitting on a stool at the front, puffing on his pipe, and would start lecturing. As he spoke, and one wondered “How can that be?”, it usually turned out that the next topic he turned to, outlined on the board, gave the answer. He often engaged students in discussion and there were many brilliant students in his classes.

Although Tolman was the senior chemistry faculty member after A.A. Noyes’ death in 1936, he was by then really more concerned with cosmology than with physical chemistry. He was not interested in administration, so Linus Pauling, then in his mid-thirties, became the Chairman of the Division of Chemistry and Chemical Engineering. During WWII, Tolman was chief science advisor to General Leslie Groves, who supervised the Manhattan Project at Los Alamos. After the war, he worked on the peaceful uses of atomic energy and control of nuclear weapons as the chief advisor to Bernard Baruch, the US representative to the UN’s Atomic Energy Commission. Richard Tolman died in Pasadena on September 5, 1948.