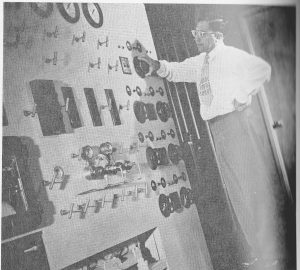 The sixth recipient of the Richard C. Tolman Medal is a native of Victoria, British Columbia. His student days were spent in Seattle at the University of Washington’s Department of Chemical Engineering. In 1940, he was the first graduate student of the late Professor K. A. Kobe to receive his Ph.D. degree. Dr. Doumani thereupon joined the staff of the Union Oil Company of California Research Laboratory, then located in Wilmington, California. He moved to Brea ten years later when the Union Oil Research Center was established at that location. He enjoys the unique job title of Consultant – a rare distinction for a full time employee. With his wife, Sally, and three children, Tom now resides in Fullerton.

The outstanding technical accomplishments for which Dr. Doumani is being honored are in the field of petrochemicals and petroleum processing. He has been issued 53 patents relating to catalytic hydrogenation, synthesis of organic sulfur compounds, chlorinated insecticides, production of polymer intermediates, and the nitration of cyclic aliphatic hydrocarbons and olefins. Many of his ideas have come to full fruition by being utilized in large scale industrial operations. One of the most significant of these is the hydrodealkylation of aromatic petroleum fractions to produce naphthalene, knows as the “Unidak” process. As a consequence, Dr. Doumani’s chemical engineering contributions have not only had a direct effect upon industrial operations, but have also benefited the general, petroleum product-consuming, public.

In addition to being honored for his technical contributions, Dr. Doumani is also being honored for his many years of active and valued service to the Southern California Section of the American Chemical Society. Tom served the Section as Editor of SCALACS from 1948 to 1950, and was Section Chairman in 1953. He has since served as a member of the Board of Trustees and as a Section Councilor, and last year was General Chairman of the first Western Regional Meeting of the ACS. In addition to his service at the local level, Tom has been a member of several National Council committees, and is presently a member of the Professional Relations and Status Committee. He is also a member of the American Institute of Chemical Engineers, a Fellow of the American Association for the Advancement of Science and a Registered Professional Engineer in the state of California.

Above and beyond his outstanding qualifications as a chemist and chemical engineer, and his long service to the American Chemical Society, Tom Doumani is a truly remarkable man. He has the capacity not only to command the respect and admiration of his professional peers, but also to gain the love and devotion of his subordinates and co-workers. He is endowed with an exceptionally fertile imagination, an almost boundless energy and vitality and a dogged patience and determination to advance his ideas from conception to practical application. He is something of a philosopher and these qualities show through in one of his favored sayings: “Success consists in tackling and licking the tough problems that nobody else wants to take on.”

This is the man who has earned the distinction of being chosen the recipient of the Richard C. Tolman Medal for 1965.

Subject: The Importance of Chemical Processes in the Petroleum Industry

Dr. Doumani received his training in the chemical Engineering Department of the University of Washington where he was the first doctorate (1940) of the late Prof. K. A. Kobe. His research dealt with the process reactions of nitration, amination by reduction, and mercuration. At Union Oil he has continued process reaction work except for a period (1954-55) when he was supervisor of product development for Union Oil’s chemical subsidiary and during 1955-56 when he was invited to be a Research Associate at Argonne National Laboratory.

Dr. Doumani has over 70 publications and patents and one book dealing with chemical processes, catalysts, or apparatus. He was co-discoverer of nitrosomethane and its dimer formed by a photochemical reaction. A basic patent of his relates to the “Unidak” process for the production of naphthalene from petroleum. One of the patents in which he is co-inventor has been used in the manufacture of “Nylon 6”. Some of the solid catalyst patents deal with mixed noble metal catalysts for reforming; inorganic sulfate-containing catalyst for reforming, hydrocracking, and desulfurizing hydrocarbons; and, acid, basic and neutral catalysts for the synthesis of sulfides and mercaptans.

He has taught six different courses relating to petroleum processes in university in the Southern California area.

Dr. Doumani has served the American Chemical Society in a wide variety of capacities at the local as well as the National level.

Abstract: The problem of producing petroleum products and pure hydrocarbons to meet the demands of industry has required the development of unique and efficient chemical processes. In many cases essentially complete transformation of the hydrocarbons in petroleum fractions has been necessary. This has also required the development of processes for the removal of deleterious impurities associated with all petroleums. The important role of chemical processes for the production of these hydrocarbons will be discussed.

More than one hundred members and guests of the Southern California Section of the American Chemical Society were present for the Section’s annual Richard C. Tolman Medal award meeting. The meeting was held the evening of April 6th in the beautifully appointed El Dorado Room at Los Angeles’ new Pavilion Music Center.

Dr. Newman then presented the Richard C. Tolman Medal for 1965 to Dr. Thomas F. Doumani. Dr. Doumani is honored for his outstanding accomplishments in the field of petrochemicals and petroleum processing, and for his years of service to the American Chemical Society. In addition to being a Past Chairman of the Southern California Section (1953), Dr. Doumani has been an Editor of SCALACS, a member of the Board of Trustees and General Chairman of the First Western Regional Meeting, held last year. He is presently a Councilor of the Southern California Section and a member of the National ACS Committee on Professional Relations and Status. His technical contributions have been made as an employee of Union Oil Company of California, where he presently holds the title of Consultant. He holds 53 patents relating to catalytic hydrogenation, synthesis of organic sulfur compounds, chlorinated insecticides, production of polymer intermediates and the nitration of various types of hydrocarbons.

Dr. Doumani was introduced to the meeting by his long-time colleague, Dr. William E. Bradley, Vice President (Research) of Union Oil Company of California, and a member of the Orange County Section. Dr. Bradley’s reminiscences of Dr. Doumani’s work on the nitration of light hydrocarbons during World War II fittingly set the stage for Dr. Doumani’s award address on “the Importance of Chemical Processes int he Petroleum Industry”.

Dr. Doumani pointed out that petroleum – “black gold” – would be of little use to us without the application of chemistry. Chemical processes are important to the petroleum industry because they give the industry flexibility by eliminating dependence on crude composition and variable markets, and because they enable the industry to be a reliable source of chemicals at low, stable prices. The address was liberally illustrated with examples of the wide variety of products obtainable from petroleum by catalytic processes.