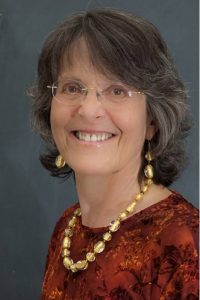 
Joan Selverstone Valentine graduated from Smith College in Northampton, Massachusetts in 1967 with an A.B. in Chemistry. Four years later, she was the first woman to receive a Ph.D. in Chemistry from Princeton University. After a year as an Instructor at Princeton, she was appointed Assistant Professor of Chemistry at Rutgers University in New Brunswick in 1972. In 1980, she moved to UCLA, where she is now Professor of Chemistry and Biochemistry. In addition to her research and teaching activities at UCLA, Professor Valentine served as Associate Editor of the journal Inorganic Chemistry from 1989 to 1995 and has served as Editor-in-Chief of the journal Accounts of Chemical Research since September 1994. She was the recipient of a Research Career Development Award from the National Institutes of Health from 1976 to 1981. She also received the Alpha Chi Sigma Faculty Research Award in 1985, the Smith Medal in 1991, the McCoy Award in 1996, the John C. Bailar, Jr. Medal in Coordination Chemistry in 2004, and the Seaborg Medal in 2008. In 2005, Dr. Valentine was elected to the National Academy of Science and in 2007 to the American Academy of Arts and Sciences. Professor Valentine’s research has focused on the role of metal ions in biological oxidation and in naturally occurring biological antioxidant systems. It has had three central themes: (1) studies of isolated copper-zinc superoxide dismutase (CuZnSOD) proteins, (2) biological studies of CuZnSOD in vivo, and (3) coordination complexes as models for catalysts involved in biological oxidation. Since the 1970’s, her laboratory has played a major role in characterizing the properties of CuZnSOD and in the last few years has broadened to include studies of the role of mutations in CuZnSOD in causing familial amyotrophic lateral sclerosis (ALS, Lou Gehrig’s Disease).
********
Tolman Award Dinner
Thursday, May 7th, 2008
UCLA Faculty Center

“How Super Are Superoxide Dismutases?”

Abstract: The existence of superoxide dismutase (SOD) enzymes was reported first in 1969. At that time, little was known about the chemical reactivity of superoxide, O2-, other than that it disappeared rapidly by disproportionation as soon as it was formed, giving dioxygen and hydrogen peroxide as products. The possibility that superoxide was produced in living cells had been considered, but it was widely assumed that superoxide, if it were formed in vivo, would disappear so rapidly that it would pose no threat to life. For that reason, many found the existence of SOD enzymes, which catalyzed this already fast reaction, to be quite puzzling, implying, as it did, the presence of super-reactive target(s) in the cell.

This was the situation when I started my research into the reactivity of superoxide and of superoxide dismutases over thirty years ago. The picture that subsequently emerged in my own laboratory and in those of many others in the field tells a very bioinorganic story that continues to be full of surprises. SOD enzymes evolved independently at least three times, and all contain redox metal ions at their active sites. Their importance is indicated by their near ubiquitous distribution in the natural world. Over these years, we have come to appreciate that each of the SOD metalloenzymes is exquisitely designed by evolution so that its active site metal ion has a proper degree of reactivity with superoxide to enable it to be a good catalyst of superoxide disproportionation. But now we have turned to exploring a much more inorganic puzzle that seems to defy the intuition we had acquired from our study of the complexity of the SOD enzymes: How is it that the simple inorganic manganous ion, Mn2+, without any protein at all, can functionally replace SOD enzymes in living cells in certain organisms that are entirely lacking in SOD enzymes?

Cost: The dinner entrée is Grilled Lemon Tarragon Chicken Paillard, with fennel, sweet peppers and artichokes. Vegetarian entrée available upon request. The cost is $37 including wine with dinner, tax, and tip (cash or check at the door).

Reservations: Please call Nancy Paradiso in the Section Office at (310) 327 – 1216 or email office@scalacs.org by Monday, May 4, 2009. Note: Please honor your reservation. If you make a reservation and do not attend, you will be liable for the cost of the dinner.

Directions are available at http://facultycenter.ucla.edu/directions.htm. There is a $9 parking fee. 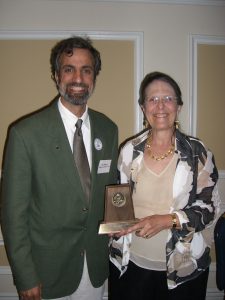