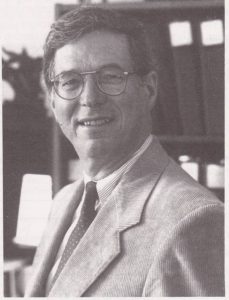 Dr. Foote is originally from Hartford, Connecticut. He received his B. S. from Yale University and his M.A. and Ph.D. from Harvard University.

He has spent his entire professional career at UCLA, beginning as an instructor, rising up through the ranks to Full Professor. He served as Chair of the Chemistry Department from 1978-1981.

He has held a number of lectureships and has received a number of awards including the Yale Science and Engineering Award for Advancement of Basic and Applied Science, the Leo Hendrick Baekeland Medal, and the McCoy Award (UCLA). In 1994, he has also been named a Fellow of the AAAS and was an ACS Cope Scholar.

Dr. Foote is known for his work with singlet oxygen. As indicated in a letter of support: “He not only examined (singlet oxygen’s) formation, physical properties, lifetime, reactions, destruction pathways, etc., but also realized its importance in biological systems. He has examined a wide range of biological targets and determined the role of not only singlet oxygen but other oxygen species in a panoply of processes, from oxygen and radical damage to DNA to the mechanism of action of neutrophils and eosinophiles.” Dr. Foote has authored over 200 technical papers.

Abstract: Oxygen plays an important role in aging, damage to materials in the environment, cellular pathology (for example, the damage following stroke or heart attack) and many other areas. Prof. Foote’s research has used a variety of methods to study the chemistry of molecular oxygen in photochemical and biological processes, especially that of an important reactive intermediate, singlet oxygen (1O2, a metastable excited state of molecular oxygen).

Singlet oxygen is very toxic to organisms because it reacts with important biological molecules such as unsaturated lipids, oxidizable amino acids, and nucleic acids, particularly guanosine derivatives. The resulting reactions cause destruction of membranes, enzyme inactivation, or mutations, all of which can lead to cell death. Foote’s group has characterized many of the primary products of these reactions.

Singlet oxygen also reacts with a large number of organic compounds to give adducts which have utility in synthesis or are biological intermediates. Many such reactions have been characterized by his research group. Singlet oxygen can be conveniently observed by measuring its weak infrared emission using an ultrasensitive germanium diode detection system. If the sensitizer is excited by a short laser pulse, the emission can be followed as a function of time. This technique provides a simple and accurate method of measuring the decay and reaction rates of this species as well as the efficiency of its production.

Oxygen-dependent photosensitized toxic effects are extremely common in nature. A particularly exciting application of this type of chemistry is the recent use of sensitizer, light, and oxygen to kill tumor cells selectively in humans. Studies of the mechanism of action of such sensitizers and attempts to prepare more effective ones are in progress.

Recently, Foote’s group showed that the fascinating all-carbon fullerene molecules (“buckyballs”) C60 and C70 and their derivatives are powerful potosensitizers for the production of singlet oxygen. Photochemical electron-transfer to and from these molecules is also possible.

A very efficient method of functionalizing C60 is photochemical [2 + 2] addition of an ynamine to give the adduct cyclobutane enamine. The buckyball residue photosensitizes the oxidation of the enamine, and the difunctional adduct shown below is formed in 92% overall yield.