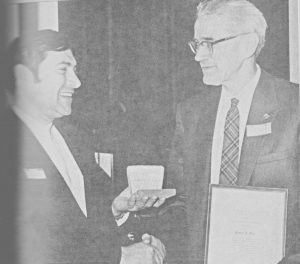 Robert Vold received his A.B. (1931) and M.S. (1932) degrees from the University of Nebraska and his Ph.D. degree from UC, Berkeley (1935). After two years a s a research chemist with the Proctor and Gamble Company in Ohio, he returned to California and spent the next four years at Stanford University as a post-doctoral fellow with Professor McBain, from whom he acquired his enthusiasm for colloid chemistry. He has been on the faculty of the University of Southern California since 1941. He is now a Professor of Chemistry and was Chairman of the Chemistry Department from 1950 to 1953. He served as Chairman of the ACS Division of Colloid Chemistry in 1948 and as Chairman of the Southern California Section in 1967.

Subject: To Teach or Do Research – That is the Question

Abstract: Dr. Vold’s address will describe some of the undergraduate curriculum revisions underway at USC, and the results of his studies of the solvation of DNA.

The undergraduate course in analytical chemistry – the old quantitative analysis – has undergone a drastic metamorphosis in the last few years, principally due to the introduction of elaborate instrumentation and the increased sophistication of the freshman course. Its content, and its role in the preparation of students for advanced courses, for actual research, and for industry will be discussed.

The extent of solvation of DNA as related to the nature of the associated positively charged counterion is a fascinating problem in both colloid chemistry and biology. This has been studied for the magnesium salts of calf thymus and T7 DNA by determination of buoyant density and of sedimentation coefficient as a function of the density of the solution. Evidence will be presented that the DNA molecule may undergo a change of shape if the thermodynamic activity of the water is reduced below 0.9.

Non-members and guests of ACS members are welcome! Members are urged to bring friends, associates and/or spouse to this outstanding annual event.

To reach the El Dorado Room, use the Grand Avenue entrance and take the elevator to the 5th floor.

The tenth recipient of the Richard C. Tolman Medal is to be honored April 1st for his contributions to the fields of colloid and surface chemistry, for his stimulating teaching and interest in pedagogical problems, for his leadership in the chemical community, for his service to the chemical profession and for exemplifying the excellent academic scientist by the integration of his talents for teaching, research and administration.

Born in Boston, Massachusetts on December 11, 1910, Robert Vold earned his A.B. and M.S. degrees from the University of Nebraska in 1931 and 1932, respectively. He then entered the University of California in Berkeley and was awarded his Ph.D. in chemistry in 1935. While a graduate student in Berkeley, he met his future wife, Marjorie, who had graduated with honors from UC in 1934. They were married in 1936.

Bob worked for two years as a research chemist for Proctor and Gamble Company in Ohio, and then returned to California where he and Marjorie both worked for four years as post-doctoral fellows with the late Professor McBain doing research on colloidal electrolytes at Stanford University. In 1941, both Volds joined the faculty of the University of California.

Dr. Vold advanced through the ranks of assistant professor and associate professor to become a full Professor of Chemistry in 1947, and served as Chairman of the Chemistry Department from 1950 to 1953. During the 1953-54 academic year, he conducted research studies as a Senior Fulbright Research Fellow in Professor Overbeek’s laboratory at the University of Utrecht, Netherlands. The following two years were spent as a visiting professor of physical chemistry at the Indian Institute of Science, Bangalore, India, under the auspices of the International Cooperation Administration of the U. S. State Department. At Bangalore, he was an active participant in setting up a new Ph.D. program. He revisited India for two months in the summer of 1965, serving as consultant to a chemistry institute at Jadavpur University, Calcutta, for college teachers in chemistry.

Dr. Vold’s research interests have centered on various aspects of colloid chemistry, involving participation in a number of Gordon Conferences, and in the activities of the Division of Colloid Chemistry, of which he served as chairman in 1948. He has been concerned with the phase behavior of soaps in both aqueous and non-aqueous systems, relations between the colloidal structure of gels and observable macroscopic properties, adsorption and the mechanism of detergency, stability of non-aqueous suspensions, relation of the properties of adsorbed interfacial films to the stability of emulsions, and the solvation of macromolecules. He is the author or co-author of over a hundred research papers, and with his wife, of a paperback text on Colloid Chemistry in the Reinhold series on Selected Topics in Modern Chemistry.

His influence upon chemistry teaching has gone far beyond his own excellent performance in the undergraduate quantitative analysis course and in both elementary and advanced colloid chemistry courses. Professor Vold was strongly influential in developing the USC system of graduate education in chemistry. He has also organized foundation-supported teacher institutes, in which experienced chemistry teachers were brought up to date and gained new purposes. In addition, he has sponsored contests for students in colloid chemistry, tending to lend new emphasis in this field on a national scale.

Bob Vold has been a member of the Southern California Section of the American Chemical Society since joining the USC faculty. He has served on the membership, program, student affiliate, and nominations and elections committees; and as chairman of the high school contest (1948), long range planning (1968) and nominations and elections committees. He was a Councilor from 1960 to 1963 and Chairman of the Section in 1967, and is currently serving as an Elected Member of the Executive Committee (1969-71 term).

In addition to his many services the ACS, Dr. Vold has served the chemical profession and the teaching profession as a founding member of the California Association of Chemistry Teachers. He was chairman of the Southern Section in 1961. In addition, he is a member of Phi Beta Kappa, Sigma Xi, Phi Lambda Upsilon, Pi Mu Epsilon, Alpha Chi Cigma and the Faraday Society.

Skilled investigator, accomplished and loved educator, leader of the chemical community, hard-working and high-minded citizen – these are but some of the well deserved accolades to be bestowed on Dr. Robert D. Vold when he receives the Richard C. Tolman Medal at the Music Center on April 1, 1970.

Approximately seventy members and guests of the Southern California Section were present for the Section’s tenth annual Richard C. Tolman Medal award meeting on April 1, 1970. The meeting was held in the beautiful El Dorado Room of the Los Angeles’ world-renowned Music Center.

Among those present at the festive occasion were two of the nine past winners of the Tolman Medal – Dr. Anton B. Burg (1961) and Dr. Arthur W. Adamson (1966). attending as invited guests were the Chairman of the San Gorgonio Section, Dr. Geoffrey Frohnsdorff, and one of the COuncilors of the Orange County Section, Dr. George W. Campbell, Jr. Dr. Norman Topping, President of USC, was unable to attend. Paul Jacobson represented the USC SAACS Chapter.

After a social hour, sponsored by the USC Division of Physical Sciences and Department of Chemistry, and an elegantly served prime rib dinner, Dr. Eugene N. Garcia, Chairman of the Southern California Section, introduced the guests and made the appropriate announcements of forthcoming meetings. He then presented an amendment to the section by-laws changing the election of section officers from the Fall to the Spring. This change was desired to give more time for the reorganization of committees for the succeeding year. The amendment was carried by more than two-thirds of the members present.

Following a brief intermission, Dr. Garcia introduced Dr. Anton B. Burg, who made the introductory remarks presenting the awardee, Dr. Robert D. Vold, to the meeting. Dr. Burg recalled when the Volds – Bob and Marjorie – came to USC in 1941, and said he owed much to them for his success as chairman of the Chemistry Department during the following decade. No chairman of the Southern California Section, Dr. Burg added, has done as much as Dr. Vold in the American Chemical Society’s national councils.

Chairman Garcia read the award citation and presented the Tolman Medal and certificate to Dr. Vold. The awardee was honored for his contributions to chemistry over a period of 35 years, for his stimulating teaching, for his leadership in the chemical community and the American Chemical Society, for his service to the profession of chemistry and for exemplifying excellence in the academic scientist by the integration of his talents for teaching, research and administration.

Dr. Vold first thanked the many people behind his receiving the award: his high school teacher who gave him a love of nature, Professor Washburn of Nebraska who showed him the joys of research, Professor Hillebrand of UC Berkeley who taught him to stand on his own feet in the research laboratory, Professor McBain of Stanford who gave him his love of surface and colloid chemistry, his wife and collaborator, Marjorie, who has been his “best critic”, and finally his many students. He then reviewed the revisions that have recently been made in the USC chemistry curriculum, revisions which he viewed with enthusiastic approval. In the university milieu, he said, teaching and research interact and there is only an apparent dichotomy between the two activities. In the final part of his address, Dr. Vold discussed some of the work on the solvation of the DNA molecule recently carried out in his laboratories. The work indicates that the molecule may undergo a change in shape in salt solutions with a thermodynamic activity of water below 0.9.