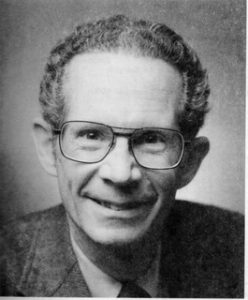 Prof. John D. Baldeschwieler of the California Institute of Technology is awarded the Tolman Medal for achievement in chemistry and for public service. He has made pioneering discoveries in nuclear magnetic double-resonance, ion cyclotron resonance (ICR) spectroscopy, extended X-Ray absorption fine structure (EXAFS), and perturbed angular correlation of gamma radiation.

His education includes a B.Che.E. from Cornell University and a Ph.D. in Physical Chemistry from U. C. Berkeley. He started his academic career at Harvard in 1969, then moved on to Stanford, where he was promoted to full professor in 1967. After four years in Washington, where he was deputy director of the President’s Office of Science and Technology, he returned to California to be Chairman, Division of Chemistry and Chemical Engineering, Caltech.

He has been a Visiting Scientist at the National Cancer Cancer Institute, Bell Laboratories, the Stanford Synchrotron Radiation Laboratory and the E. T. H.-Zurich. Other public service activities include the NSF Committee for Planning, The National Cancer Institute Carcinogenesis Advisory Committee and the Defense Science Board. He served on the US-USSR Joint Commission on Scientific and Technical Cooperation and the Committee on Scholarly Communication with the Peoples Republic of China.

Professor Baldeschwieler is described as a pioneer of novel techniques, a dreamer willing to explore, develop and seek important applications of new scientific methods even before the rest of the world can decipher the new acronyms! His enormously creative talents led to the development of chemically modified vesicles as targeted delivery systems for cancer therapy and diagnostics. He founded Vestar, a company dedicated to the rapid development and marketing of this important new technology.

John Baldeschwieler won the American Chemical Society Award in Pure Chemistry in 1967. His career to date (and he is still young), including brilliant advances in pure science, projection of these advances into practical technology and extensive public service to his government and to the international scientific community, make him a most worthy recipient of the Tolman Medal.