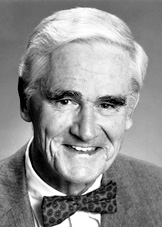 Donald J. Cram was born in Vermont, received his B.S. from Rollins College, Florida in 1941, his M.S. in organic chemistry from the University of Nebraska in 1942, and his Ph.D. from Harvard in 1947. He was a postdoctoral fellow at MIT and came to UCLA in 1947 as an ACS Fellow. In 1948, he was appointed assistant professor of chemistry at UCLA, associate professor in 1951 and full professor in 1956. Dr. Cram is the author or coauthor of 335 research papers that reflect the joint efforts of over 100 students who obtained their Ph.D. degrees under his supervision, plus 79 postdoctoral investigators from all over the world who came to work with him; 57 of these former coworkers now occupy academic positions. Cram pioneered and developed such new areas of research in organic chemistry as the design and synthesis of host compounds that selectively orient guest compounds and catalyze their reactions, carbanion structure and stereochemical capabilities, cyclophane chemistry, phenonium ions and internal return, open-chain conformational analysis and the stereochemistry of substitution reactions at sulfur.

His research has been internationally recognized and widely honored. He received the ACS Western Sectional Award in 1953, a Guggenheim Fellowship in 1955 and the McCoy Award (twice). He was elected to the National Academy of Sciences in 1961 and in 1974 was the third recipient of the ACS Arthur C. Cope Award and the second organic chemist to be given the California Scientist of the Year Award. Other awards for creative work in organic chemistry received by Professor Cram include the ACS Award and the Chemical Manufacturers Association Award. He has also been Guest Professor at numerous prestigious universities all over the world, as well as special lecturer (such as Centenary Lecturer and Medalist of the Royal Institute of Chemistry in Great Britain in 1976) and in 1977 was granted an Honorary Doctor degree from Uppsala University, Sweden. In 1983, he received an Honorary Doctor of Science Degree from USC. This year (1985), in addition to the Tolman Medal, he received the American Chemical Society Roger Adams Award and has been named to the first Winstein Chair in Organic Chemistry at UCLA, and the Willard Gibbs Medal.

The organic textbooks authored and coauthored by D. J. Cram contributed materially to the teaching of organic chemistry and have been translated into many foreign languages. Professor Cram has served in many posts in the American Chemical Society, and on the Editorial Boards of the Journal of Organic Chemistry, Tetrahedron and Tetrahedron Letters, and Organic Reactions.

Abstract: Synthetic organic compounds containing enforced concave surfaces of molecular dimensions (cavitands) form host-guest complexes when the interior surface of the cavitand is complementary to the external surface of guests. Host-guest complementary relationships are subject to molecular design, as are the unique chemical and physical properties that emerge from the interactions between the complexing partners. Cavitands are described which discriminate in complexation between the alkali metal cations as guests by factors as great as 109. Other cavitands containing well-shaped holes complex linear molecules such as S=C= or 0=0 in noncomplementary solvents such as benzene or chloroform. By shell-closure of two bowl-shaped cavitands, a molecular cell was composed (a carcerand) in whose interior were trapped the components of the medium. Portals at each end of the carcerand allowed entrance and egress of guests as small as H2O or O2, but (CH3)2NCHO,(CH2)4O, Cs+, and Ar were incarcerated during the shell closure. Potential uses for cavitands and carcerands in the catalysis, detection and analytical sciences will be exemplified.

Acknowledgement: The UCLA Chemists Association will host the Social Hour; this support is gratefully acknowledged. Professor Herbert D. Kaesz of the UCLA Department of Chemistry and Biochemistry made the arrangements; his efforts and the cooperation of the Department and the Recreation Center are greatly appreciated.

Donald J. Cram, University of California, Los Angeles, was announced as the winner of the Nobel Prize in Chemistry on October 14, 1987. He shares the prize with two other chemists: Charles J. Pederson, retired from E. I. duPont de Nemours and Co., and Jean-Marie Lehn, Louis Pasteur University in Strasbourg and College de France in Paris. The Swedish Academy of Sciences cited the pioneering work of these three researchers over the last two decades in synthesizing molecules that perform some of the same functions as biological molecules.

Cram began research 15 years ago in the design and synthesis of molecules that mimic enzymes. These molecules, which resemble cages, have been designed to act as hosts that selectively orient guest molecules or ions and catalyze their reactions. Some hosts bind monopositive metal ions best, while other hosts have concave inner surfaces of dimensions equal to guests, and still others are molecular vessels that act as sieves. Unique properties arising from the interactions between complexing partners have potentially important applications in the catalysis, detection and analytical sciences.

Dr. Cram has received many awards recognizing his research. In 1985, he received the Tolman Medal and the Willard Gibbs Medal; other awards include the ACS Arthur C. Cope Award, the UCLA McCoy Award, the California Scientist of the Year Award and the Chemical Manufacturers Association Award. He was elected to the National Academy of Sciences in 1961. Cram, who joined the UCLA faculty in 1947, was named the first hold of the Saul Winstein Chair in Organic Chemistry in 1985.

Following is an interview with Dr. Cram, researcher and teacher, conducted on November 6, 1987 by Sandra Lamb, Chair of the Southern California Section of the American Chemical Society.

Sandra: What would you offer as advice to a young person just starting out in a career in chemistry?

Dr. Cram: 1. Get their hunting license, the requisite degrees necessary to do professional work. Without a hunting license, it is impossible to find the frontiers of chemistry.
2. Find research areas that are important, viable and not much worked in.
3. Get a good wife or husband.
4. Work hard, indeed work very hard and single-mindedly toward both short-term and long-term goals.
5. Guard your health with exercise, sleep and a balanced diet.
6. Get completely away from chemistry occasionally.

Sandra: What’s next for you? What about the future?

I predict that I have about ten more good years of research left after which, or possibly during which, I hope to write several novels.

Sandra: What role do you foresee computers playing in the kind of research you perform?

Dr. Cram: Up until rather recently, I personally depended on CPK Molecular Models to guide us in our design of research problems in the host-guest chemical field. These models are based on many crystal structures whose solutions would have been impossible without computers.

More recently, once we have candidate target compounds in mind, we can, and are, using computers to select those targets most likely to perform their envisioned tasks.

I anticipate that in the long run, molecular models will be relegated to a less important role and that computers will dominate. What I like about molecular models is the fact that I can hold them in my hands.

Sandra: What do you think is the most important aspect of teaching undergraduate classes in chemistry?

Dr. Cram: My first duty as a teacher is to explicitly transfer to the student an ever-updated account of the subject matter. My second duty is to inspire the students to put out a full effort. My third duty is to provide the students with a means of measuring themselves against the challenges of the subject matter and their fellow students. My fourth duty has been to introduce a sense of pleasure and nobility associated with the study of organic chemistry. I am an enthusiast with regard to organic chemistry and enthusiasm is contagious. I also have a light heart which tends to make the loads that I have carried less heavy.

Sandra: What do you think is the most important aspect of graduate education?

Dr. Cram: I have felt that my duties to my graduate students are as follows:

Much is transferred from person to person by setting a good example. I have tried to teach my students how I think about research. I like them to know that chemical research has been my mistress for almost half a century; always tempting, always different, not always pleasing, every challenging and sometimes very joyous. Every scientist that I have known who has done good research has fallen in love with research, certainly I have. Finally, I must see to it that they turn in a good thesis, and that they will be competitive when they go out looking for positions.

Sandra: Well. I think that we have covered the important topics in your career as an outstanding scientist, research and teacher.

*The 1987 Nobel Prize in Chemistry was awarded jointly to Donald J. Cram, Jean-Marie Lehn and Charles J. Pedersen “for their development and use of molecules with structure-specific interactions of high selectivity”. For more information, please see the Nobel prize website at: https://www.nobelprize.org/nobel_prizes/chemistry/laureates/1987/cram-bio.html

Professor Donald Cram passed away on June 17, 2001 at his home in Palm Desert, CA after a battle with cancer. Click here for the UCLA obituary