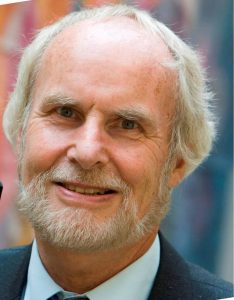 Karl Christe received his B.S., M.S. and Ph.D. from the Technical University in Stuttgart, Germany. He immigrated to the U.S. in 1962 and worked for 5 years at the Stauffer Research Center in Richmond, CA. In 1967, he joined Rocketdyne in Canoga Park and in1994 he accepted split positions between the Air Force Research Lab, Edwards and the Loker Hydrocabon Research Institute of USC. In 2005, he moved full-time to USC where he is working as a Research Professor.

Christe has more than 50 years of experience in the synthesis and characterization of novel compounds at the limits of oxidation and coordination. He has achieved the first syntheses of many spectacular compounds, such as ClF3O, ClF3O2, halogen perchlorates, OIF4OF, OsF4O2, and ions, such as NF4+, ClF6+, ClF6-, ClO2F2-, ClO2F2+, ClF2O+, ClF4O-, NF3+, NF2O+, and NH2F2+. He has developed fluorine gas generators for chemical lasers and in 1986 has discovered the first chemical synthesis of elemental fluorine which for more than a century had been deemed impossible. His synthesis for truly anhydrous tetramethyl ammonium fluoride has led to a renaissance of high coordination number chemistry. Among the novel compounds, which he prepared in this manner, are the XeF5- and IF52- anions, the only known pentagonal planar species.

He has a very broad background in general chemistry. He has prepared the first stable OH3+ and SH3+ salts, has discovered a new process for metal joining, has developed new methods for the introduction of fluorine into aromatic rings, and has pioneered graphite based ion exchange resins for powerful oxidizers in anhydrous HF. In addition, he has made major contributions to fluorocarbon chemistry, inorganic high polymers, chemical laser technology, and methane oxy-chlorination. More recently, he has made major breakthroughs in polynitrogen chemistry and has discovered the N5+, N3NFO+, N7O+ and cyclo-N5- ions and many new polyazides. In collaboration with David Dixon, he has created the first quantitative scales for oxidizer strength and Lewis Acidity. He is presently working on green replacements for the highly toxic propellants and explosives, ammonium perchlorate, hydrazine and lead diazide.

Christe has more than 350 publications in refereed journals and 63 patents. He is a member of the European Academies of Sciences in Liege and Arts and Sciences in Salzburg. He has received numerous awards, including the Alfred Stock Preis of the German Chemical Society (2006), the ACS Award in Inorganic Chemistry (2003), the Prix Moissan (2000), the ACS Award for Creative Work in Fluorine Chemistry (1986), and the NASA Apollo Achievement Award (1969).

Abstract: Topics include the syntheses of the tetrafluoroammonium and hexafluoro-chlorine(VII) cations, and of chlorine trifluoridedioxide, the chemical synthesis of elemental fluorine, the synthesis of pentagonal-planar AX5 species, polynitrogen and polyazide chemistry, oxygen balanced ionic-liquid liquid monopropellants, green replacements for ammonium perchlorate, and quantitative scales for oxidizer strength and Lewis acidity. It is shown that chemistry not only can be fun but many lessons besides chemistry can be learned.

Cost: There is a choice of entrée of Filet Mignon or Chilean Sea Bass. The cost is $35 including salad, dessert, tax, tip and wine (cash or check at the door).

Directions: The University Club is located on the USC campus at the corner of Exposition Blvd. and Figueroa Street. Please go to http://universityclub.usc.edu/html/content.cfm?CID=68 for driving directions and parking information. Please note that there is an $8 fee to park in the university parking lots.