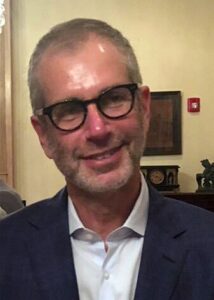 Congratulations to the 2019 Recipient of the Richard C. Tolman Medal
A. S. Borovic, University of California, Irvine

A. S. Borovik was raised in Chicago and received his B.S. degree in Chemistry with Honors from Humboldt State University. As an undergraduate student he did research at Oregon State University as an NSF Summer Fellow and at Woods Hole Oceanographic Institution as a WHOI Fellow. Both research experiences involved using nuclear chemistry to trace metal ions in the environment. He obtained his Ph.D. in Chemistry at the University of North Carolina-Chapel Hill under Tom Sorrell where he developed photophysical models for the active site of copper proteins. As an NIH postdoctoral fellow with Larry Que at the University of Minnesota, he designed synthetic complexes that replicated the properties of dinuclear iron centers in proteins. Upon completion of his postdoctoral fellowship, Professor Borovik joined the faculty at Ithaca College where he taught chemistry and mentored 6 undergraduate research students for two years. He then moved to the University of California-Berkeley as a postdoctoral associate with Ken Raymond, working on stereonostic coordination chemistry. From there, he joined the Chemistry Department at Kansas State University where he began a broad program on the effects of the secondary coordination sphere on metal ions. After 3 years, he moved his research group to the University of Kansas, continuing research on the development of metal complexes and hybrid materials with unique structural and functional properties. In 2006, Professor Borovik and his research group moved to the University of California-Irvine, expanding his approach to now include designing artificial metalloproteins. Professor Borovik has won several teaching and research awards that include a 2017 MERIT Award from the NIH and the 2018 National Cotton Award in Synthetic Inorganic Chemistry from the American Chemical Society. He is currently a UCI Distinguished Professor.

Abstract: Location matters…no compound operates in isolation without interacting with its local environment. Metalloproteins are example systems whose active sites contain intricate structures that aid the performance of specific functions with high selectivities and efficiencies. The complexity of these systems complicates the study of their function and the understanding of the properties that give rise to their reactivity. One approach that has contributed to the current level of knowledge is the study of synthetic constructs that mimic one or more aspects of the native metalloproteins. These systems allow for analysis of individual components of structure and how they affect function. We are thus able to establish structure-function correlations that are necessary for evaluating mechanisms. Using key architectural features from active sites of metalloproteins as inspiration, my group has developed design approaches to prepare systems that regulate local environments around a metal center. These systems are used to study the activation of small molecules (e.g., O2 and H2O) that are essential in maintenance of human health. This presentation will highlight our molecular designs from small synthetic complexes to the use of larger, more diverse protein hosts.

RSVP: To make a reservation to attend the virtual presentation, please sign up at
http://bit.ly/RSVP-Toman2019

A confirmation email with the zoom meeting link will be sent.