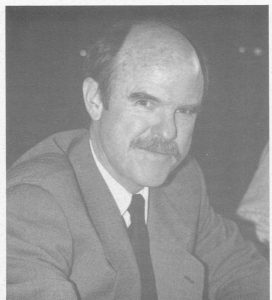 Kendall N. Houk was born in Nashville, Tennessee on February 27, 1943. He received his B.A. (1964), M.S. (1966), and Ph.D. (1968) degrees at Harvard, working with R. A. Olofson as an undergraduate and R. B. Woodward as a graduate student in the area of experimental tests of orbital symmetry selection rules. In 1968, he joined the faculty at Louisiana State University, becoming Professor in 1976. In 1980, he moved to the University of Pittsburgh, and in 1986, he moved to UCLA. Professor Houk was a Camille and Henry Dreyfus Teacher Scholar and a Fellow of the Alfred P. Sloan Foundation. He received the LSU Distinguished Research Master Award in 1968, the Von Humboldt US Senior Scientist Award in 1981, the Akron ACS Section Award in 1984, and an Arthur C. Cope Scholar Award in 1988. He was the 1991 recipient of the ACS James Flack Norris Award in Physical Organic Chemistry and the 1998 winner of the Schrodinger Medal of the World Association of Theoretically Oriented Chemists (WATOC). He received the Bruylants Chairs from the University of Louvain-la-Neuve in Belgium in 1998, and an honorary doctorate (Dr. rer. Nat. h. c.) from the University of Essen in Germany in 1999. He has been a Visiting Professor at Princeton, and has served on the Advisory Boards of the Chemistry Division of the National Science Foundation, the Petroleum Research Fund, and a variety of journals including Accounts of Chemical Research, the Journal of Organic Chemistry, Chemical and Engineering News, and the Journal of Computational Chemistry, and as a member of the NIH Medicinal Chemistry Study Section and the NRC Board of Chemical Sciences and Technology. From 1988-1990, he was Director of the Chemistry Division of the National Science Foundation. He was Chairman of the UCLA Department of Chemistry and Biochemistry from 1991-1994. He is a Fellow of the AAAS and of the WATOC.

Professor Houk is an authority on theoretical organic chemistry, and his group is involved in developments of rules to understand reactivity, computer modeling of complex organic reactions, and experimental tests of the predictions of theory. Among current interests are the theoretical investigation of antibody-catalyzed reactions, the quantitative modeling of asymmetric reactions used in synthesis, and the molecular dynamics and reactions of hemicarcerands and other host-guest complexes. He has published over 400 articles in refereed journals and was the 35th most-cited chemist in the period 1981-1997.