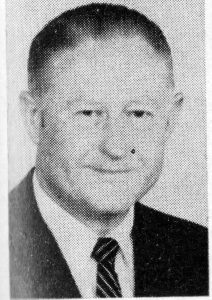 The eighth recipient of the Richard C. Tolman Medal was chosen for his many important contributions to the petroleum and chemical industries, and for his continuing service to his fellow man as a leader in church, civic and professional organizations. Born in Crawford, Georgia at the turn of the 20th century, Ulric Bray received his B.S. from Emory University in 1921 and his Ph.D. from Yale University in 1925.

Young Dr. Bray came to Southern California to do research at Caltech as a National Research Council Fellow. He returned East to join Allied Chemical Corporation and soon invented the first non-platinum catalyst for the oxidation of ammonia. The lure of our sunny climate must have been strong, for Dr. Bray returned to California within a year and joined Union Oil Company. He rose to Assistant Manager of Research before leaving Union to become a consultant to Caterpillar Tractor Company, Alox Corporation and Lubrefiner Corporation and later to found the Bray Oil Company.

Dr. Bray’s ingenuity has led him to develop many new processes and process improvements in the fields of chemical manufacture and petroleum refining. These include solvent refining, the development of lubricating oil additives, the production of oil soluble metal sulfonates, and the development of the first heavy duty outboard motor oil. His pioneering work in chemical additives has led to remarkable improvements in the field of lubricants, hydraulic fluids and corrosion preventives. He has published many articles in the past forty years, but his largest contribution to the technical literature is the 128 patents on which his name appears as inventor or co-inventor.

Ulric Bray has served the Southern California Section of the American Chemical Society for many years – as a member of many committees, as Chairman in 1963, and presently, as Chairman of the Board of Trustees. He has also served well the many other professional societies in which he holds membership. He is an active member and a former chairman of the Southern California Section of the Society of Automotive Engineers; and an active participant in the affairs of the American Petroleum Institute, the American Institute of Chemists, American Society of Lubrication Engineers and the Society of Aerospace Materials and Process Engineers.

Dr. Bray has received many honors in the course of his long career. He is a member of Phi Beta Kappa and Sigma Xi, and an Honorary Fellow of AAAS. He was awarded the AIC Honor Scroll Award in 1964 and received an honorary Sc.D from Emory University in 1966.

In addition to his technical, professional and business activities, Dr. Bray has found time and energy to perform heroic service to his community. He has long been a leader in the fight to keep Southern California’s air habitable, and presently serves as a consultant to the APCD and chairman of a special fact-finding committee on air pollution. His long-time interest in baseball has led to his sponsorship of the El Monte Lambert Park Tiny League Baseball Team. His family has recently put him to work to help save the Pasadena Playhouse. Based on past experience, the future of the playhouse is a good bet.

“Review of Additives for Lubricating Oils”

Abstract: The development of additives to impart properties not attainable with the best refined petroleum oils presents a fascinating story of both theoretical and “Edisonian” approaches. The chemical guide posts established after the shortcomings of the best refined oils were recognized, still serve to aid constant improvements in lubricants for use on land, in the air, in space, on the sea and under the sea.

Social Hour: Bray Oil Company will be host for cocktails during the social hour.

Reservations: Mail check for $8.50 per person to American Chemical Society, 1540 N. Hudson Avenue, Los Angeles, Cal. 90028 not later than April 5, 1968. Late reservations may be made by telephoning Mrs. Brooks at 472-7278 before 11 a.m. April 9, 1968, and payment will be accepted at the door. Non-members and guests of ACS members are welcome! Members are urged to bring friends, associates, and spouses to this meeting. Use Grand Avenue entrance and take elevator to 5th floor. 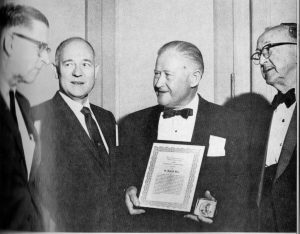 Chairman May read the award citation and presented the Tolman Medal and certificate to Dr. Bray. He was honored for his many important contributions to the chemical and petroleum industries, for his service to the ACS and other professional societies, for his public service as a civic and church leader, and particularly for his service in the fight against air pollution.

Dr. Bray’s award address traced the history of the development and use of lubricating oil additives. In addition to additives which modify the physical properties of a lubricant – oiliness agents, film strength agents, pour point depressants and viscosity index improvers – chemical additives are needed and used in today’s engine oils. These include oxidation inhibitors, detergents, alkalizers and corrosion inhibitors. As better engine performance is required and attained, better lubrication is needed. “Constant improvements in additives will result in better and better lubricants as time goes on”, Dr. Bray concluded.