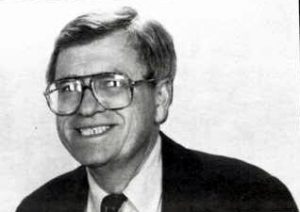 Peter C. Ford is in the midst of a highly successful career as Professor of Chemistry at the University of California, Santa Barbara. Dr. Ford was born in Salinas, California in 1941. He was graduated with honors from the California Institute of Technology in 1962 and completed his doctorate with Kenneth Wiberg at Yale in 1966. He went to Stanford the next year where he quickly learned the trade of physical coordination chemistry as an NIH postdoctoral fellow under the guidance of Henry Taube. In 1967, he joined the faculty of the UCSB, and rose to the rank of full professor by 1977. Dr. Ford has over 180 research publications to his credit, and during the last twenty-five years, he has served as research director for more than thirty doctoral candidates and over twenty post-doctoral research associates.

Dr. Ford has been the recipient of a Dreyfus Foundation Teacher-Scholar Award, a Senior Fullbright Fellowship, and the Alexander von Humboldt Senior Scientist Award. He has also served as an organizer of numerous ACS and other symposia, and he is on the editorial boards of the “Journal of Cluster Science” and “Coordination Chemistry Reviews”.

Dr. Ford’s research contributions have been in several areas of inorganic and organometallic chemistry. Perhaps among his most visible accomplishments are his work on photophyiscal processes including some of the first quantitative measurements of reactions resulting from metal-to-ligand charge transfer excitation, and the elucidation of detailed mechanisms of photosubstitution reactions. His was one of the first groups to find and thoroughly study soluble metal catalyst systems for the water gas shift reaction. He has applied flash photolytic techniques to the study of important catalytic intermediates, such as the Wilkinson hydrogenation catalyst. His work has been characterized by peers as insightful, authoritative, careful, elegant and creative. He is said to tackle important problems with powerful techniques and incisive analysis.

In addition to the quality of this research, Dr. Ford is well known as a highly successful educator. He is praised by peers and former students alike as being a superb mentor who has created a stimulating environment in his laboratory for graduate teaching through which students are very well trained and are imbued with a broad perspective of their field.

Professor Peter Ford is exemplary of many of the criteria mentioned above for the Tolman Medal, and the Southern California Section of the American Chemical Society is pleased to announce his receipt of the 1992 Tolman Medal.