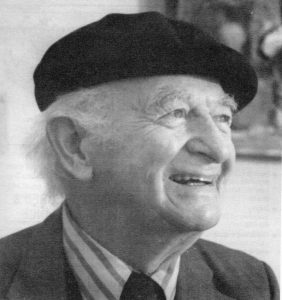 Much of his scientific work has dealt with the nature of the chemical bond. It has included experimental studies on the structure of crystals by x-ray diffraction and the structure of gas molecules by electron diffraction, the study of the magnetic properties of substances, the investigation of the nature of serological systems and the structure of antibodies, the structure of proteins, the molecular basis of general anesthesia, and the role of abnormal molecules in causing disease, especially abnormal hemoglobins in relation to sickle-cell anemia and other hereditary hemolytic anemias, and abnormal enzymes in relation to mental disease. In addition, he has carried on theoretical studies, especially the application of quantum mechanics to the structure of molecules and the nature of the chemical bond, the extension of the theory of valence to include metals and intermetallic compounds, including the so-called icosahedral quasicrystals and the high-temperature superconductors, and the development of a theory of the structure of atomic nuclei and the nature of the process of nuclear fission. During recent years much of his work has been on the application of chemistry to biological and medical problems.

His discoveries in the field of medicine led to the award to him of the Thomas Addis Medal of the National Nephrosis Foundation, the Phillips Medal for Contributions to Internal Medicine by the American College of Physicians, the Gold Medal of the Rudolph Virchow Medical Society of New York, the Gold Medal of the French Academy of Medicine, the Vermeil Medal of the City of Paris, the Modern Medicine Award for Distinguished Achievement, the Eliasberg and Goedel Medallions in Anesthesiology, the John K. Lattimer Medal of the American Urological Association, the John and Samuel Bard Award in Medicine and Science, and the Dr. Martin Luther King, Jr. Medical Achievement Award, given for pioneering work in determining the cause of sickle-cell anemia. In 1986, he received the Sesquicentennial Commemorative Medal of the National Library of Medicine of the USA.

Professor Pauling has been given honorary doctorates by some forty-five universities, including Chicago, Princeton, Yale, Cambridge, Oxford, London, Paris, Toulouse, Montpellier, Liege, Melbourne, Cracow, Berlin and Zagreb. He was President of the American Chemical Society in 1949 and Vice-President of the American Philosophical Society from 1951 to 1954. He is a Fellow of the American Physical Society, a foreign member of the Royal Society of London, Associe etranger of the French Academy of Sciences, Membre d’honneur de la Fondation de la maison de la chimie (Paris), and an honorary member of the Academies of Science of Norway, USSR, India, Italy, Belgium, Portugal, Poland, Austria, Yugoslavia, Romania, and several other countries. Since 1966, the Annual Pauling Award Symposium has been sponsored in his honor by the Puget Sound and Oregon Sections of the American Chemical Society. Since 1974, the annual Linus Pauling Lecture has been presented in his honor at Stanford University under the sponsorship of the Departments of Applied Physics, Biochemistry, Biological Sciences, Cell Biology, Chemistry, Genetics, Medical Microbiology, Physics and the Stanford Magnetic Resonance Laboratory. In 1987, the annual Linus Pauling Lectureship in Chemistry was instituted in his honor at Oregon State University. In 1989, the annual Linus Pauling Lectureship was instituted in his honor at the California Institute of Technology.

In 1948, he was given the Presidential Medal for Merit by President Truman “for exceptionally meritorious conduct in the performance of outstanding services to the United States from October, 1940 to June, 1946.” He is Grand Officer of the Order of Merit of the Italian Republic and recipient of the Medal of the Senate of the Republic of China.

On October 10, 1963, he was awarded the Nobel Peace Prize for 1962. He has also received the International Lenin Peace Prize, the Ghandi Peace Prize, the Grotius Medal for Contributions to International Law, the Janice Holland Peace Award (jointly with Ava Helen Pauling), and the Women Strike for Peace Annual Award (May, 1982). In 1961, he was chosen Humanist of the Year by the American Humanist Association. He received the Gold Medal of the National Institute of Social Sciences in 1979, the Vollum Award, and the 1978 Award of Merit of the Decalogue Society of Lawyers. In 1987, he received the first Lifetime Achievement Award of the Bertrand Russell Society and also, during the same year, the Peace and Culture Award of the Soka Gakkai International.

He has published over 650 scientific papers, about 200 articles on social and political questions, and many books, including The Structure of Line Spectra (with Samual Goudsmit); Introduction to Quantum Mechanics (with E. Bright Wilson, Jr.); The Nature of the Chemical Bond (one of the most cited scientific books of the twentieth century); General Chemistry; College Chemistry; No More War! (a citation from which appears in Bartlett’s Familiar Quotations); The Architecture of Molecules (with Roger Hayward); Science and World Peace; Vitamin C and the Common Cold (which received the Phi Beta Kappa prize for best scientific book of the year); Orthomolecular Psychiatry: Treatment of Schizophrenia, co-edited with David Hawkins; Chemistry (with Peter Pauling); Vitamin C, the Common Cold, and the Flu; and Cancer and Vitamin C (with Ewan Cameron). His latest book, How to Live Longer and Feel Better, was published in February, 1986. 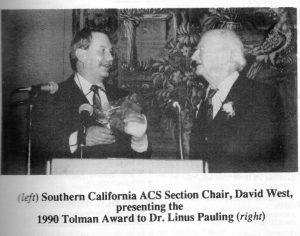 In 1960, the Southern California Section of the American Chemical Society chose to honor Dr. Richard Chase Tolman (1881-1948) “because of his breadth of interest and contributions to the field of Chemistry in Southern California and for his human qualities combined with his intellectual pursuits.” It is with considerable pride each year that we honor a scientist whose work and ideals carry on the tradition of the man for whom this award is named.

The winner of the Tolman Award for 1990 is Dr. Linus Pauling, distinguished scientist, scholar and man — a modern-day “giant” in Newton’s terms — whose work permits us all to “see” a little further. Thanks! 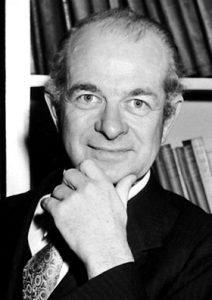 *The 1954 Nobel Prize in Chemistry was awarded to Linus Pauling “for his research into the nature of the chemical bond and its application to the elucidation of the structure of complex substances”.

Affiliation at the time of the award: California Institute of Technology (Caltech), Pasadena, CA, USA

Prize motivation: “for his research into the nature of the chemical bond and its application to the elucidation of the structure of complex substances”

Linus Pauling was born in Portland, Oregon, in the United States. His family came from a line of Prussian farmers, and his father worked as a pharmaceuticals salesman, among other things. After first studying at Oregon State University in Corvallis, Oregon, Linus Pauling earned his PhD from the California Institute of Technology in Pasadena, with which he maintained ties for the rest of his career. In the 1950s, Linus Pauling’s involvement in the anti-nuclear movement led to his being labeled a suspected communist, which resulted in his passport being revoked at times. Linus and Ava Helen Pauling had four children together.

1954 Prize: The development of quantum mechanics during the 1920s had a great impact not only on the field of physics, but also on chemistry. During the 1930s Linus Pauling was among the pioneers who used quantum mechanics to understand and describe chemical bonding – that is, the way atoms join together to form molecules. Linus Pauling worked in a broad range of areas within chemistry. For example, he worked on the structures of biologically important chemical compounds. In 1951 he published the structure of the alpha helix, which is an important basic component of many proteins.

1962 Prize: The atom bombs dropped on Hiroshima and Nagasaki were a turning point in Linus Pauling’s life. Together with other scientists he spoke and wrote against the nuclear arms race, and he was a driving force in the Pugwash movement. It sought to reduce the role of nuclear arms in international politics and was awarded the Peace Prize in 1995. In 1959, Linus Pauling drafted the famous “Hiroshima Appeal”, the concluding document issued after the Fifth World Conference against Atomic and Hydrogen Bombs. He was one of the prime movers who urged the nuclear powers the USA, the Soviet Union and Great Britain to conclude a nuclear test ban treaty, which entered into force on 10 October 1963. On the same day, the Norwegian Nobel Committee announced that Linus Pauling had been awarded the Peace Prize that had been held over from 1962.