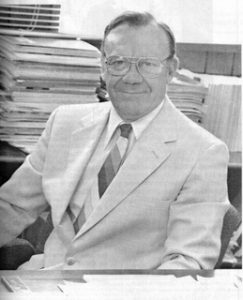 M. Frederick Hawthorne was born in Ft. Scott, Kansas, August 24, 1928. He obtained his B.A. degree from Pomona College in 1949 (Hon. D.Sc., 1974), and his Ph.D. from UCLA with Professor Donald J. Cram in 1953 (Atomic Energy Commission Predoctoral Fellow 1951-53). From 1953 until 1954, he carried out postdoctoral research at Iowa State University with Professor George Hammond. In 1954, Hawthorne joined the staff of the Rohm and Haas Co., Redstone Arsenal Research Division, and later headed a group concerned with boron hydride and carborane chemistry. In 1960, Dr. Hawthorne served as a Visiting Lecturer in Chemistry at Harvard University and returned there in the Fall of 1968 as Visiting Professor in Inorganic Chemistry. He served as Laboratory Head, Rohm and Haas Co., Philadelphia during 1961 and became Professor of Chemistry at the University of California, Riverside in 1962. Professor Hawthorne was an Alfred P. Sloan Fellow from 1963-66 and became Associate Editor of Inorganic Chemistry in 1966. He has been Editor of that journal since 1969. Dr. Hawthorne also serves as a member of the Editorial Boards of Inorganic Syntheses and Progress in Solid State Chemistry. In January 1969, Hawthorne became Professor of Chemistry at UCLA. His principal interests are exploratory syntheses and reaction mechanism studies of inorganic and metalorganic systems and catalysts and he has established a research program in organometallic immunochemistry. He is a recipient of the 1972 Herbert Newby McCoy Award and the 1973 American Chemical Society Award in Inorganic Chemistry, among others. He is a member of the U. S. National Academy of Sciences, the New York Academy of Sciences, the American Academy of Arts and Sciences, Fellow of the American Association for the Advancement of Science and a member of the Cosmos Club. Professor Hawthorne has held numerous endowed lectureships and visiting professorships as well as serving upon or chairing a variety of Committees of the National Research Council. He recently spent October of 1986 in Japan as a Fellow of the Japan Society for the Promotion of Science.

Abstract: Recently, synthetic routes to novel aluminum and silicon-containing heterometallic carborane compounds have been developed. Exploration of the chemistry of closo-3-Et-3,1,2-A1C2B9H11(1), and related systems, has resulted in the isolation of a number of new aluminacarborane species. Among these is the nominal 1-dimer, commo-3, 3′-A1[(exo-8,9-(μ-H)2A1(C2H5)2-3,1,2-A1C2B9H9) ( 3′,1′,2′-A1C2B9H11)] (2), which has been characterized by a combination of spectroscopic techniques and a single crystal X-ray diffraction study. Complex 2 is a highly unusual aluminum sandwich compound containing an anionic moiety which consists of a formal A1(III) atom π-bonded in η5-fashion between the five-membered C2B3 faces of two dicarbollide ligands. A related silicon-containing compound, commo-3, 3′-Si(3,1,2-SiC2B9H11)2 (3) has been structurally characterized by X-ray crystallography, Compound 3 has been shown to be an unusual centrosymmetric silicon sandwich complex consisting of a formal Si(IV) atom π-bonded between the parallel faces of two dicarbollide ligands. The bonding responsible for the existence of Compounds 2 and 3 will be discussed. Species 2 and 3 are the only known examples of sandwich bonding involving formal A1(III) and formal Si(IV), respectively.

Acknowledgement: The UCLA Chemists Association will host the Social Hour, this support is gratefully acknowledged.