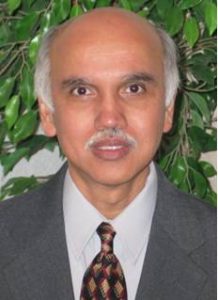 Professor G. K. Surya Prakash, Ph.D., was born in 1953 in Bangalore, India. He earned a B.Sc (Hons) in chemistry from Bangalore University and an M.S. in chemistry from the Indian Institute of Technology, Madras. Prakash came to the US in 1974 and joined Professor George Olah’s group at Case Western Reserve University, Cleveland, Ohio to pursue graduate work. He moved with Professor Olah to the University of Southern California (USC) in 1977 to help establish the Loker Hydrocarbon Research Institute and obtained his Ph.D. in physical organic chemistry at USC in 1978. He joined the faculty of USC in 1981 and he is currently a Professor and the holder of the George A. and Judith A. Olah Nobel Laureate Chair in Hydrocarbon Chemistry at the Loker Hydrocarbon Research Institute and Department of Chemistry. He also serves as the Scientific Co-Director of the Institute. His primary research interests are in superacid, hydrocarbon, synthetic organic & organofluorine chemistry, with particular emphasis in the areas of energy and catalysis. He is a co-inventor of the proton exchange membrane based direct oxidation methanol fuel cell. Professor Prakash is a prolific author with close to 550 scientific papers and 21 patents. He has also co-authored or edited 8 books. His latest book co-authored with G. A. Olah and A. Goeppert titled “Beyond Oil and Gas: The Methanol Economy” (Wiley-VCH, 2006) is getting wide attention and recognition. He has received many awards and accolades including two American Chemical Society National Awards, the first in 2004 for his achievements in the area of fluorine chemistry and the second in 2006 for his contributions to hydrocarbon chemistry. He is a fellow of the American Association of Advancement of Science and a Member of the European Academy of Arts, Sciences and Humanities. He also sits on several Editorial Boards of Chemical Journals.

“Ubiquitous Fluorine and Its Multifaceted Role in Chemistry”

Abstract: Methods for the efficient synthesis of fluorinated molecules are booming because of fluorine’s inherent ability (high electronegativity and its relatively close size to hydrogen) to exert special properties on organic molecules. Last several decades have also witnessed the profound use of fluorinated compounds in material science, agrochemistry and pharmaceutical industry. This lecture will focus on the award winner’s synthetic efforts in the area of fluoroalkylations as well as studies on proton conducting fluorinated membranes for direct oxidation methanol fuel cells.

Reservations: There is an entree choice of filet mignon or salmon for dinner. The complete dinner includes wine, tax and tip. The cost is $50. Please call Nancy Paradiso in the Section Office at 310 327-1216 or email office@scalacs.org.

Directions: Enter USC campus off of Exposition, west of Figueroa Street. Directions to the campus and parking are available at http://www.usc.edu/bus-affairs/uclub/about/map.html. Parking is free for this event.