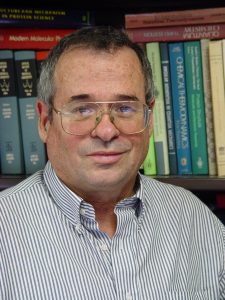 Dr. Arieh Warshel is a Professor of Chemistry and Biochemistry at the University of Southern California, Los Angeles, USA, where he has been a faculty member since 1976. Before moving to USC he was at the Weizmann Institute of Science between 1972 and 1976 achieving the rank of an Associate Professor. During 1974-1976 he was also EMBO Visiting Scientist at the MRC Laboratory of Molecular Biology, Cambridge, England.

Abstract: One of the main goals of the emerging field of proteomics is to provide a reliable sequence-structure-function correlation of biological molecules. Although the conversion of sequence to structure is still very challenging, the structures of many key biological systems have been determined by X-ray studies and related structures may be deduced by homology. Thus one of the primary challenges is the correlation of known structures of proteins to the corresponding biological functions. Fortunately, computer simulation approaches have reached a stage where they have become an important tool in quantitative structure-function correlation of macromolecules. This lecture will review the advances in computer simulations of biological processes emphasizing studies of enzymatic reactions, light-induced photobiological reactions and ion flow in ion channels. It will be demonstrated that most structure-function correlation issues can now be formulated as well-defined problems in modern computational chemistry, and that the use of computer simulations allows one to reach quantitative or semiquantitative conclusions about the relevant systems. It is also pointed out that the resulting understanding can eventually be transferred into medical advances.

Reservations: The entrée is Chicken California, chicken breast topped with avocado, tomato, provolone served with tomato-basil infused rice and fresh vegetables. The cost is $35, including wine with dinner. RSVP to the Section Office at 310 327-1216 by Thursday, April 22, 2004.

Directions: Check the USC website for complete directions—www.usc.edu. Follow the link for “Visit USC” and University Park Campus. 110 (Harbor Freeway). Take the Exposition Boulevard exit. Turn into the main entrance Exposition Boulevard and Watt Way (Gate 1). Commons Restaurant is located next to the University Bookstore, 2nd floor of the Commons Building. There is a $6 charge for parking.

Arieh Warshel, Distinguished Professor of Chemistry at the USC Dornsife College of Letters, Arts and Sciences and fellow of the National Academy of Sciences, has earned a new title: Nobel laureate. The Royal Swedish Academy of Sciences awarded the Nobel Prize in chemistry for 2013 on October 9th to Warshel and two colleagues for developing the key principles behind computer simulations that are now indispensable in the study of chemical reactions.

Warshel, Martin Karplus of the Université de Strasbourg in France and Harvard University, and Michael Levitt of Stanford University were recognized for “the development of multiscale models for complex chemical systems.” Their crucial achievement was to marry classical and quantum mechanics in order to model both the relatively large-scale movements of atoms in a molecule, and the minute dances of the free electrons that shuttle between atoms and spark many chemical reactions.

“Warshel’s first breakthrough was his simulation of a key protein in the eye in collaboration with Karplus in 1972. Karplus was an expert in quantum mechanics, which explains physical behavior at an extremely small scale. Warshel and Levitt as PhD classmates had developed a pioneering computer modeling program based on classical mechanics that could be used on molecules of any size. Warshel then reunited with Levitt in 1976 to publish the revolutionary first computerized model of an enzymatic reaction, scalable to molecules of any size. That year also marked Warshel’s arrival at USC.

Warshel had long been interested in enzymes, which control almost all chemistry in the body, and continues to study their reactive properties to this day. The methods he and his collaborators developed can be used on a practical level to develop new drugs, he explained at the news conference, “or just in my case to satisfy your curiosity.”

Scientists today use the methods developed by Warshel and his colleagues to model chemical processes both accurately and efficiently. They apply the quantum mechanical half of the method only to the free electrons and nuclei directly involved in a reaction, and use classical mechanics to study the rest of a molecule. Warshel has been applying his method to study how proteins are responsible for transferring signals within a single cell. One of his recent studies explained the essential workings of adenosine triphosphate, the energy factory for the body.

*The 2013 Nobel Prize in Chemistry was awarded jointly to Martin Karplus, Michael Levitt and Arieh Warshel “for the development of multiscale models for complex chemical systems”.

Affiliation at the time of the award: University of Southern California, Los Angeles, CA, USA

Prize motivation: “for the development of multiscale models for complex chemical systems”

Arieh Warshel was born in the Sde Nahum kibbutz in what was then British Palestine (now Israel). He studied first at Technion in Haifa, and received his Ph.D. from the Weizmann Institute of Science in Rehovot in 1969. After spending time at Harvard University in Cambridge, Massachusetts in the United States, he worked at the Weizmann Institute of Science and the Laboratory of Molecular Biology in Cambridge, England. He has worked at the University of Southern California in Los Angeles since 1976. Arieh Warshel is married with two daughters.

The world around us is made up of atoms that are joined together to form molecules. During chemical reactions atoms change places and new molecules are formed. To accurately predict the course of the reactions at the sites where the reaction occurs advanced calculations based on quantum mechanics are required. For other parts of the molecules, it is possible to use the less complicated calculations of classical mechanics. In the 1970s, Martin Karplus, Michael Levitt, and Arieh Warshel successfully developed methods that combined quantum and classical mechanics to calculate the courses of chemical reactions using computers.