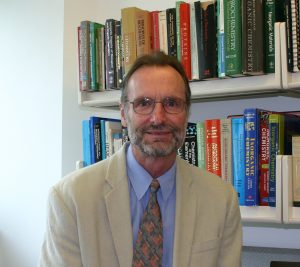 Christopher Reed has been doing chemistry in Southern California for more than thirty years. He is presently Distinguished Professor at the University of California, Riverside and Executive Director of the newly-created Center for S and P Block Chemistry. Born and educated in New Zealand, he obtained his PhD at The University of Auckland with Warren R. Roper FRS and did postdoctoral studies with James P. Collman at Stanford University. He began his independent research career at USC in 1973, spending 25 years there. His areas of research interest have traditionally concentrated on coordination chemistry and organometallic chemistry, but now include organic and physical chemistry. Particular interests include the bioinorganic chemistry of iron porphyrins, copper and dioxygen, spin coupling phenomena, a magnetochemical alternative to the Spectrochemical Series, fullerene chemistry, metal-organic framework solids, weakly binding ligands, weakly coordinating anions, carboranes, acids, and reactive cations across the periodic table. His work has been recognized by Sloan, Dreyfus Teacher-Scholar, Guggenheim and Senior von Humboldt Awards. He is a Fellow of the AAAS and the NZIC and currently serves on the Editorial Advisory Boards of Chemical Communications, Accounts of Chemical Research and Heteroatom Chemistry. He is also serves on the Executive Committee of the INORG division of the ACS.

Abstract: Icosahedral carborane anions such as CHB11Cl11– are amongst the least coordinating, most chemically inert anions known. They are also amongst the least basic, so their conjugate acids, H(carborane), are superacids (i.e. stronger than 100% H2SO4). Acidity scale measurements indicate that H(CHB11Cl11) is the strongest pure Brønsted acid presently known, surpassing triflic and fluorosulfuric acid. Nevertheless, it is also an extremely gentle acid — because its conjugate base engages in so little chemistry. Carborane acids separate protic acidity from anion nucleophilicity and destructive oxidative capacity in the conjugate base, to a degree not previously achieved. As a result, many long-sought, highly acidic, reactive cations such as protonated benzene (C6H7+), protonated C60 (HC60+), tertiary carbocations (R3C+), vinyl cations (R2C=C+-R), silylium ions (R3Si+) and discrete hydronium ions (H3O+, H5O2+ etc.) can be readily isolated as carborane salts and characterized at room temperature by X-ray crystallography.

Reservations: The entrée is a duet of London Broil and Chicken Breast Dijonnaise (marinated, grilled tender beef, sauteed mushrooms and demiglace sauce along with grilled chicken breast, creamy dijonnaise sauce, garlic roasted potatoes and sauteed asparagus). The cost is $32 including dinner, tax, tip, gratuity, wine and parking. Please call the Section Office at 310 327-1216 by Friday, April 15th with your reservation.