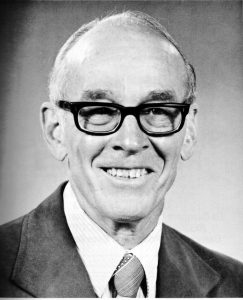 Paul D. Boyer was born in Provo, Utah and received his B.S. degree from Brigham Young University in 1939 and his Ph.D. from the University of Wisconsin in 1943. He has served on the faculties of Stanford University, the University of Minnesota, and the University of California, Los Angeles. He has either authored or edited many papers, books, and periodicals. He has received many honors. Among them are the American Chemical Society Award for research in enzyme chemistry, and an honorary doctorate of philosophy from the University of Stockholm, the McCoy Award for research in chemistry at UCLA, and election to the National Academy of Sciences. He has also served the American Chemical Society in elective office, for example as Chairman of the Minnesota Section in the period of 1951 to 1953. He has also served as President of the American Society of Biological Chemists.

Dr. Boyer has made extraordinary scientific contributions to biological catalysis. In fact, his significant contributions to our understanding of the mechanism of action enzymes was specifically recognized by his election to the National Academy of Sciences in 1970.

While carrying out an extraordinary productive research program, Dr. Boyer made a major contribution to UCLA and to the Southern California Research Community as the founding director of the UCLA Molecular Biology Institute. This interdepartmental organized research unit is a major center of biochemical and bioorganic research on the UCLA campus. Without Professor Boyer’s ceaseless efforts, this important research center would not exist. He was instrumental in attracting new faculty to the participating departments, in both developing plans, and supervising construction of the building which now houses a large number of institute members, and in organizing training programs for graduate students and postdoctoral fellows. He has played a crucial role in insuring that the Southern California Scientific Community contributes to the dramatic advance of molecular biology, one of the most rapidly developing sciences of our era.

Abstract: Present concepts of enzymic catalysis will be briefly reviewed, with emphasis on the role of protein conformational changes. This will be followed by presentation of how 18O probes of reactions of carboxylate and phosphate groups of substrates while bound at catalytic sites can reveal details of catalytic mechanisms. Results include recent studies in ATP using and forming enzymes, explainable by binding at one site favoring catalysis at another in multi-subunit enzymes with identical catalytic sites. Some general implications of catalytic site cooperativity will be briefly considered.

Reservations: Please call the Section Office (749-4670) no later than Friday, April 9th. The cost of the special veal cordon bleu dinner is $12.00 (students, $8.00). The UCLA Chemistry Department will host the Social Hour in honor of the Award recipient.

The Nobel Prize in Chemistry 1997 was divided, one half jointly to Paul D. Boyer and John E. Walker “for their elucidation of the enzymatic mechanism underlying the synthesis of adenosine triphosphate (ATP)” and the other half to Jens C. Skou “for the first discovery of an ion-transporting enzyme, Na+, K+ -ATPase”.