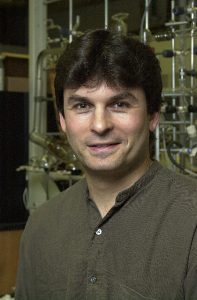 Richard B. Kaner received a Ph.D. in inorganic chemistry from the University of Pennsylvania in 1984 working with Prof. Alan MacDiarmid (Nobel Laureate 2000). After carrying out postdoctoral research at the University of California, Berkeley, he joined the University of California, Los Angeles (UCLA) in 1987 as an Assistant Professor. He was promoted to Associate Professor with tenure in 1991 and became a Full Professor in 1993. He has published over 225 papers in top peer reviewed journals and holds 13 U.S. patents with 14 more pending. Professor Kaner has received awards from the Dreyfus, Fulbright, Guggenheim and Sloan Foundations as well as the Exxon Fellowship in Solid State Chemistry and the Buck-Whitney Research Award from the American Chemical Society for his work on refractory materials including new synthetic routes to ceramics, intercalation compounds, superhard materials, graphene and conducting polymers. Along with appointments in the Departments of Chemistry and Materials Science & Engineering, Professor Kaner served as the Associate Director of the California NanoSystems Institute from 2007-09. Professor Kaner’s teaching has been recognized with the Hanson-Dow Award for Excellence in Teaching, the Harriet and Charles Luckman Distinguished Teaching Award and the Gold Shield Faculty Prize for Academic Excellence.

Abstract: By using either interfacial polymerization or rapidly mixing aniline, oxidant and acid, pure nanofibers of polyaniline can be produced. The key to forming nanofibers is to suppress secondary growth that results in the agglomerated particles found in conventional polyaniline synthesis. Not shaking or stirring the solutions after the initial reaction is also important. Our methods are template-free and readily scalable. Stable and processable colloids are now available. The synthesis of nanofibers of polyaniline derivatives has been accomplished by adding appropriate initiators. The applicability of these ideas to form nanostructures of polypyrrole and polythiophene will be discussed.

Polyaniline nanofibers exhibit an exceptional photothermal effect in which they instantaneously melt and cross-link upon exposure to a camera flash. This novel flash welding technique can be used to form patterned nanofiber films, create polymer based nanocomposites and make asymmetric polymer membranes. These asymmetric structures can act as mechanical actuators (artificial muscles) when exposed to strong acids. Polyaniline nanofibers are useful in many applications such as resistive-type sensors where their high surface area enable very rapid response times often less than two seconds. Polyaniline nanofibers can be modified to respond to many different vapors including toxic agents such as hydrogen sulfide. The key is using a metal salt such as CuCl2 that reacts with H2S to produce CuS and HCl. This process converts a weak acid (H2S) into a strong acid (HCl) that in turn can be readily detected at very low concentrations. Polyaniline nanofibers can be decorated with metal nanoparticles which not only can enhance sensor response, but also leads to molecular memory devices and catalysts.

Menu and Cost: There is a choice of dinner entrée of Herb and Sea Salt Crusted Black Angus Prime Rib of Beef or Portobello Mushroom Ravioli Gigante (with wilted spinach, wild mushroom fricassee and white Italian truffle oil). The cost is $40 including wine with dinner, tax, and tip (cash or check at the door).

Directions are available at http://facultycenter.ucla.edu/directions.htm. There is a $10 parking fee. 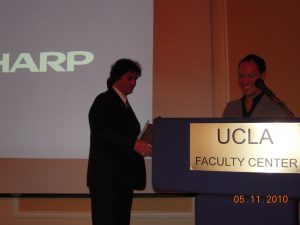