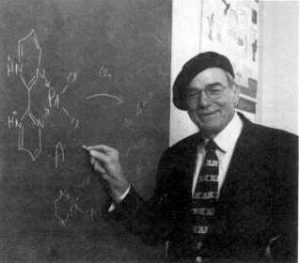 William A. Goddard III was born in El Centro California and lived his early years in farm towns across California (El Centro, Delano, Indio, Lodi, Oildale, MacFarland, Firebaugh, also Yuma AZ), where his dad made the wooden boxes used to ship agricultural products. He always dreamed of living in LA and became an undergraduate at UCLA (BS Engineering, June 1960) and a graduate student at Caltech [PhD in Engineering Science (minor in Physics), Oct. 1964]. He joined the chemistry faculty at Caltech in November of 1964 where he remains as the Charles and Mary Ferkel Professor of Chemistry and Applied Physics and the Director of the Materials and Process Simulation Center.

Goddard’s early focus was to use first principles quantum mechanics to understand the origins of chemical bonding and to use this understanding to predict reaction mechanisms, catalytic pathways, and excited states of molecular systems. This led to the Generalized Valence Bond (GVB) method, which proved quite useful for obtaining a much better understanding of chemical reactivity particularly for transition metal systems.

In addition, he invented new approaches to include high levels of electron-correlation into wavefunctions with a minimum number of orbitals and new approaches for excited states and reactive systems. He pioneered the development of first principles Pseudopotentials (Effective Core Potentials) that make practical the accurate treatment of heavy atoms.

These interests later broadened to materials science applications on metal alloys, polymers, semiconductors, and ceramics and to large-scale simulations of proteins and viruses. Goddard was a pioneer in applying accurate QM methods to reactions on metal and semiconductor surfaces, biological systems, and organometallic systems. He was a pioneer in examining the reaction mechanism of practical industrial catalysts such as metal oxide selective oxidation and ammoxidation catalysts and Ag catalyzed epoxidation. These bold applications of theory to complex systems were carried out when computers were very slow, and required considerable finesse and insight.

By 1980, Goddard had turned his attention to simulating the properties for systems far too large for QM. Starting from QM he developed new generations of force fields (FF) useful for accurate molecular dynamics (MD) calculations. Using simple bonding concepts with only atomic-based parameters, he developed the generic FF (DREIDING and UFF) and charge prediction methods (Charge Equilibration) equally applicable to any part of the periodic table (through element 103, Lr). More recently, Goddard has developed the ReaxFF, which allows the chemistry to be accurately described with a FF.

Goddard has made fundamental contributions to most areas of chemistry and theory and to materials and biological sciences. He shows an ability to find underlying mechanisms to explain diverse phenomena, often tackling new problems not previously studied by theorists. He goes far beyond the norm in computational chemistry, developing new methodologies for the underlying theory and focusing on developing a qualitative understanding underlying the quantitative results.

What is characteristic of Goddard is his quest to understand phenomena. He thinks about problems like any good experimentalist trying to understand why theory or experiment gives particular answers and what would happen if he modified the system. Eventually this leads to a new intuitive understanding that encompasses the quantitative details.

These contributions have been recognized by election to the National Academy of Science (1984) and the International Academy of Quantum Molecular Science (1988). He won the ACS Award for Computers in Chemistry (1988), the Feynman Prize for Nanotechnology Theory (1999), and the NASA Space Sciences Award (2000).
As an educator, Goddard considers it his responsibility to help develop in each student the knowledge and ability to reason independently and creatively. He stimulates the students with interesting problems and ideas and lets them discover solutions. When there are problems, he helps work through the issues, but lets the student take the initiative to discover the solution. Goddard’s courses at Caltech are well known for providing new insights in quantum mechanics and bonding and for using a Socratic style that involves the students in thinking about the material rather than just accepting it. He was awarded the Richard M. Badger Teaching Prize in Chemistry, Caltech (1995).

Goddard’s ability to make qualitative predictions about chemical and materials systems led to many consulting activities in the early years and later to direct support from various industrial laboratories. This has led Goddard to tackle difficult practical problems, ranging from wear inhibitors in automobile engines, to corrosion, scale, and wax inhibitors in oil pipelines. These activities led him to co-found several companies: Molecular Simulations Inc., Schrödinger Inc., Materials Research Source LLC, and BionomiX Inc., which work directly with industry in areas ranging from quantum mechanics and molecular dynamics to materials science and bioinformatics.

Goddard is quick to point out that although he has been intimately involved in all the above activities, it is the extremely talented students, postdocs and staff which he has been privileged to work with at Caltech that have actually accomplished these feats. And it is Yvonne to whom he has been married for 43 years, their 4 children (Bill IV, Suzy, Cece, and Lisa) and 8 grandchildren (Max, Amy, Chloe, Nicky, Lily, Katie, Nico, and Sophia), all of whom live in California, that provide him with the energy to focus on science and education.

Advances in theory and methods are making it practical to consider fully first principles (de novo) predictions of many important systems and processes in the Chemical, Biological, and Materials Sciences. Indeed such de novo atomistic simulations will likely revolutionize both the mode for doing the science and the nature of industrial applications, where quantitative models will eventually become the basis for design and operations.

The strategies for linking the time scales from electrons to machines will be illustrated with examples in the various areas.
A summary will be presented of some of the recent advances in the methodology including:

Some recent applications of atomistic simulations to catalysis, materials science, and biochemistry will also be summarized. Topics to be covered will be selected from:

Reservations: The cost of dinner is $38 per person. There is a choice of Chilean Sea Bass or Prime Rib. Please call the Section office at (310) 327-1216 by Thursday, April 12th for reservations.