The Recipient: Herbert D. Kaesz received his Ph.d. in 1959 at Harvard where he studied molecular addition compounds of boron and phosphorus under F. G. A. Stone. He stayed for a postdoctoral year to follow his mentor into metal carbonyl chemistry, combining this with a teaching appointment in the Academic Year Institute for High School Teachers at Harvard. This activity carried over into his career at UCLA where he took up his first appointment in 1960 and has risen through the ranks to his present position. He was Director for several Summer Institutes for High School Teachers at UCLA while that program was being funded by the National Science Foundation.

Our speaker came to his interests in chemistry through his father who also held a Ph.D. in that field and through outstanding early teachers such as Louis Serota at Brooklyn Technical High School and R. T. Morrison and R. N. Boyd at Washington Square College, N.Y.U., where he received his B.A.

Professor Kaesz has co-authored over 100 papers in various aspects of organometallic chemistry in which field he pioneered in the synthesis of technetium carbonyl with his first students, Jack C. Hileman and Dale K. Huggins. These studies were followed by extensions into hydrido-metal cluster complexes, and currently into their application to catalysis both in homogeneous and heterogeneous systems. In 1978, he was invited to Japan as a Fellow of the Society for the Promotion of Science and recently was elected a Fellow of the AAAS.

Our speaker is proud of his record of service to the A.C.S. For the local section he served as program chairman of the 1975 Pacific Conference on Chemistry and Spectroscopy and has been a Councilor since 1975, among other duties. In the Division of Inorganic Chemistry, he was Chairman of the Organometallic Sub-Division in 1977 and is currently serving a term as Chairman of the Division. He has been Associate Editor of Inorganic Chemistry since 1968 and is on the editorial boards of various other journals.

Abstract: Synthesis and structure determination for the series of complexes Fe3 (N=CCH3) (CO)9, HFe3 (HN=CCH3) (CO)9 HFe3 (N=CHCH3) (CO)9 and H2Fe3 (NCH2CH3) (CO)9, illustrate the stepwise reduction of acetonitrile on the face of a tri-iron complex. Attempts to extend this series of triruthenium and triosmium complexes have instead led to isolation of carboxamido complexes HM3 (O=CNR2) (CO)10 (M=Ru or Os). Syntheses and interconversions between several isomeric forms of these carboxamido complexes give new insights into elemental reaction steps that could participate in conversions of CO and H2 (syngas) by metal cluster complexes.

Herbert D. Kaesz, professor emeritus of chemistry and biochemistry, died February 26, 2012 of cancer in Los Angeles. He was 79.

He was born in Alexandria, Egypt to Austrian parents. His father, a chemist, was asked to join his wife’s family business, Kurz Optical, to run the branch in Alexandria. Later, the family immigrated to the United States when the younger Kaesz was 7.

After receiving his AB from NYU, Herb went on to graduate studies at Harvard University, receiving his Ph.D. in 1959 under the mentorship of F. Gordon A. Stone, and joined the UCLA faculty in 1960 as a member of the inorganic division. He retired in 2003, but remained an active emeritus right up until his death.

His research focus was in the synthesis and applications of organometallic compounds, with a particular interest in metal carbonyls. Herb was one of the first to accomplish the synthesis of a technetium carbonyl complex, one of the last such complexes to be discovered. Later in his career, he pioneered the development of pyrolytic and photolytic methods of metal film deposition for electronic applications.

Herb was also a dedicated teacher. His principal teaching assignments were in chemistry for non-majors, general chemistry, structural inorganic and organometallic chemistry. Since his retirement he developed and taught a popular “Fiat Lux” seminar for non-majors entitled “Serendipity in Science”.

Herb performed vital service for the chemistry community. He was Chairman of the IUPAC Commission on the Nomenclature of Inorganic Chemistry — and was involved in the naming of Seaborgium. In addition, he was president of the Inorganic Syntheses Organization, which publishes the Inorganic Syntheses book series (Herb served as editor of volume 26 in this series) and served for over 30 years as Associate Editor of the ACS journal Inorganic Chemistry.

Herb was a long time member of the American Chemical Society (since 1954) and served as Councilor from 1975 to 2011 for the Southern California Section, as well as Chair in 1987 and 2006. He served on the Inorganic Division and was Chair in 1981. Besides the Tolman Award, Herb was honored with the Section’s Agnes Ann Green Award for Distinguished Service to the Section in 1997. He was always generous with his time and expertise. He most recently appeared as a panelist for the section’s centennial banquet along with Rudy Marcus, John D. Roberts, and Arthur Riggs.

Joan Kaesz, Herb’s adored wife of over 51 years (who worked with Herb for 30 years as his assistant in his capacity as journal editor), passed away in January 2010. In addition to his daughters, Susan and Judy, Herb is survived by his grandchildren Dylan Kaesz, Erin Murray, and James Murray.

As one of our long-time members, Herb will be missed not only for his academic achievements, but for his wonderful personality and willingness to share of himself. 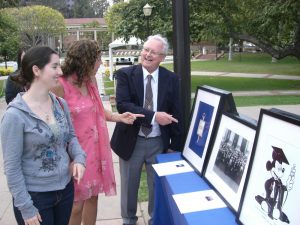 One of Herb’s favorite pictures – and activities – sharing information with students.