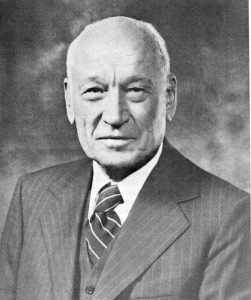 Dr. Arnold O. Beckman, founder and chairman of Beckman Instruments, Inc. is recognized internationally as a scientist, educator, business and civic leader and philanthropist. He is the inventor of the Beckman pH Meter, the Beckman DU Spectrophotometer and the Beckman Helipot – major developments in modern instrumentation for electrochemistry, chemical analysis and precision electronics during the 1935-40 period. Dr. Beckman often says that “…perhaps the greatest reward of the past five decades is the knowledge that Beckman products have contributed and are contributing to the progress of mankind…by facilitating fundamental scientific research and by contributing to better health care and a better environment.” Dr. Beckman is a vice chairman of the Board of Directors, Smith Kline Beckman Corporation, and chairman of the Board of Trustees, The System Development Foundation. He is a member of the Board of Overseers, The House Ear Institute, a director of Hoag Memorial Hospital Presbyterian and an emeritus trustee of the Scripps Clinic and Research Foundation.

A native of Collom, Illinois, Dr. Beckman was the first alumnus named by the California Institute of Technology to its Board of Trustees in 1952, served as chairman from 1964 to 1974, then elected chairman emeritus. In his honor, The Arnold O. Beckman Professorship of Chemistry was established in 1980, and he was presented with the Institute’s Distinguished Alumni Award in 1984. Dr. Beckman is a member of the Board of Overseers of the University of California at Irvine, the President’s Club of the University of Illinois and the Rockefeller University Council. He is a former member of the advisory boards of the California State University at Fullerton and Chapman College. He holds honorary LL.D. degrees from the University of California, Riverside; Loyola and Pepperdine Universities of Los Angeles; and honorary doctor of science degrees from the University of Illinois, Chapman and Whittier Colleges; and honorary doctor of Human Letters degree from the California State Board of Trustees. He is a fellow of the American Association for the Advancement of Science and the Association of Clinical Scientists, the latter presented him in 1982 with its Diploma of Honor. He is also an honorary fellow of the American Academy of Arts and Sciences, and a Benjamin Franklin Fellow of Great Britain’s Royal Society of Arts. He is a member of the National Academy of Engineering, the American Chemical Society and the Newcomen Society. He is an honorary member of the American Institute of Chemists and the American Association for Clinical Chemistry (AACC), and has served as director of SCM Corporation and the Stanford Research Institute.

Acknowledgement: The California Institute of Technology will host the Social Hour; this support is gratefully acknowledged. Professor Harry B. Gray of the Caltech Division of Chemistry and Chemical Engineering made the arrangements; his efforts and the cooperation of the Office of Dr. Ted Hurwitz are greatly appreciated.

Dr. Beckman founded Beckman Instruments, Inc. in 1935 with the development of a pH meter to measure the acidity of lemon juice in a Southern California citrus processing plant. An early example of modern electrochemical instrumentation, the Beckman “acidimeter”, as it was first known, simplified and markedly increased the speed and precision of acidity and alkalinity measurements in virtually any aqueous solution. It quickly became an indispensable tool for analytical chemists in medicine, science, industry, agriculture and many other fields.

In 1940, Dr. Beckman introduced two additional products that marked pioneering advances in measurement technology and, with the pH meter, set the young company’s course for future growth. One of the new products was the quartz photoelectric spectrophotometer, an instrument that automated chemical analyses; the other was the precision helical potentiometer, or Helipot (R), an electronic component.

The Beckman DU (R) Spectrophotometer virtually revolutionized chemical analysis by simplifying tedious laboratory procedures. In one early application, the DU made it possible to determine the Vitamin A content in shark livers in minutes with a precision of 99.9 percent. At the time, conventional biological assays with laboratory rats took a month and were accurate to plus or minus 25 percent.

The DU’s effect on chemical analysis has been likened to that of the Douglas DC-3 on commercial aviation. Although the DU was superseded by advanced models in 1964, thousands of the original instruments still are being used in laboratories throughout the world.

The Beckman Helipot was a variable resistance device, similar to a radio volume control but far more precise. Developed originally as a component for the Beckman pH meter, the Helipot became an essential component of RADAR systems in World War II. Thereafter, it found application in a wide variety of electronic equipment – from computer and control systems to scientific instruments and home appliances.

Dr. Beckman is a native of Cullom, IL. He received his bachelor’s degree in chemical engineering in 1922 and his master’s degree in physical chemistry in 1923 at the University of Illinois. He received his doctorate in photochemistry in 1928 at the California Institute of Technology and served on the Caltech chemistry faculty until 1940, when he resigned from the Institute to devote full time to the development and manufacture of scientific instruments.

Since leaving the teaching profession, Dr. Beckman has continued to maintain an active interest in education and research. The first alumnus named to Caltech’s Board of Trustees (1953), he served as Board Chairman from 1964 until 1974, when he was elected Chairman Emeritus. In 1984, the Institute honored Dr. Beckman with its Distinguished Alumni Award, and in 1985 with its Milliken Award.

Through the Arnold and Mabel Beckman Foundation, Dr. and Mrs. Beckman have contributed substantially to advancement of education and research. Their philantropies are reflected in a number of medical and scientific institutions, including Beckman Auditorium and the Mabel and Arnold Beckman Labortories of Behavioral Biology and Chemical Synthesis at Caltech, the Beckman Research Institute and Research Endowment at the University of Illiniois, the Beckman Research Institute at the City of Hope Hospital and Medical Center in Duarte, CA, the Beckman Laser Institute at the University of California-Irvine, the Beckman Vision Center at the University of California-San Francisco, the Arnold Beckman Laboratory at the Scipps Clinic and Research Foundation in La Jolla, CA, Stanford University’s Center for Molecular and Genetic Medicine, and the planned Western Headquarters and Study Center of the National Academies of Sciences and Engineering in Irvine, CA.

Many organizations have acknowledged Dr. Beckman’s technical, business and civic contributions. In 1960, the University of Illinois presented him with its Illini Achievement Award for “leadership in the field of precision instruments.” The award cited his career as a “distinguished scientist whose vision has aided in the creation of new instruments for the laboratories of a rapidly changing technological age”.

In 1980, Caltech established the Arnold O. Beckman Professorship of Chemistry as “a continuing public tribute to Dr. Beckman’s leadership at the Institute.” Endowed by friends of Dr. Beckman, the Professorship is intended “to help Caltech maintain its outstanding research programs in chemistry and to provide special recognition to a man whose leadership and support have been major factors in Caltech’s success at the leading edge of science and technology”.

In 1981, the American Association of Engineering Societies presented him with its Hoover Medal “for his leadership in the development of precision measurement and analytical instrumentation…and for his deep and abiding concern for human values, reflected in his career-long participation in education, civic and public affairs”.

In 1984, the California State University Board of Trustees awarded Dr. Beckman an honorary Doctor of Humane Letters degree. The award, which took particular note of Dr. Bekcman’s work in air pollution control, cited him as “an industrial pioneer and giant in the development and manufacture of scientific instruments who is dedicated to the betterment of human health and welfare”.

Dr. Beckman is a recipient of the Harvard Business School of Southern California’s Business Statesman Award (1966), the California Museum of Science and Industry’s California Industrialist of the Year Award (1971), the University of Southern California School of Business Administration’s Award for Outstanding Achievement in Business Management (1974), Pepperdine University’s Private Enterprise Award (1979) and the Americanism Education League’s Distinguished Community Service Award (1981). He has also received the Achievement Rewards for College Scientists’ Foundation Man of Science Award (1982), the American Academy of Achievement’s Golden Plate Award (1982), the Economic Development Corporation of Orange County’s Rock of Free Enterprise Award (1983) and the Coro Foundations’ Public Affairs Award (1983). In 1984, he received the National Society of Fund Raising Executives’ Outstanding Philantropist Award and the first Vision Award of the Luminaires, a support group for the Estelle Doheny Eye Foundation of Los Angeles.

Dr. Beckman is a founder of the Instrument Society of America, a national professional organization, and was president of ISA in 1952. In 1959, he was made an honorary life member of ISA “for his contributions to instrument technology, science and education”. In 1960, ISA established the Arnold O. Beckman Award which for 25 years was given annually to a society member for outstanding technological contribution to instrument design, development or application. In 1981, the Society presented Dr. Beckman with its first Life Achievement Award “in honor of his career achievements in instrumentation and service to the community”.

In 1974, Dr. Beckman received the Scientific Apparatus Makers Association’s SAMA Award for his contributions to measurement technology and the scientific instrument industry, and the Service Through Chemistry Award of the American Chemical Society’s Orange County Section. In 1981, he received the ISCO Award from the University of Nebraska’s Chemistry Department for significant contributions to the field of biochemical instrumentation.

He is an honorary member of the American Institute of Chemists and the American Association for Clinical Chemistry (AACC). In 1977, the AACC established the annual Arnold O. Beckman Conferences in Clinical Chemistry which bring together recognized authorities to examine leading-edge topics of interest to clinical scientists and practicing physicians. Conference topics have ranged from diagnosis and treatment of genetic diseases to the biochemistry of the brain and human behavior.

For many years, Dr. Beckman played a leading role in the campaign against air pollution. He was instrumental in initiating the scientific investigations that revealed the sources and mechanisms of photochemical smog; later he helped develop pollution control regulations and smog warning procedures for Los Angeles County.

In 1953, Dr. Beckman served as chairman of a special technical committee on air pollution appointed by California Governor Goodwin J. Knight. The committee’s report on scientific findings and its recommendations for smog abatement were acclaimed widely and served for a number of years as a standard reference for air pollution control programs.

In 1970, Dr. Beckman was named by President Nixon to a four-year term on the Federal Air Quality Advisory Board. In 1972, he was named “Outstanding Citizen of the Year” by the Orange Coast (CA) Community College District “for his continuing work in California and the nation to control environmental pollution and for the development of new scientific instruments which have advanced man’s knowledge”.

Dr. Beckman passed away on May 18, 2004 in his home in La Jolla, California after a remarkable career as a chemist, inventor, investor, and philanthropist. To read more on on his life, go to wikipedia.