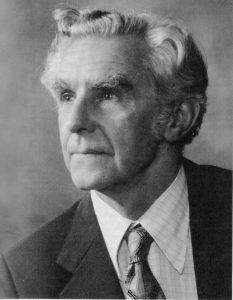 Clifford A. Bunton was born in Derbyshire, England. He was awarded his bachelor’s and doctoral degrees at University College, London, where his research into organic reaction mechanisms began in the laboratories of Hughes and Ingold. He remained at University College until 1963, when he accepted a professorship at U.C. Santa Barbara, his present position.

At Santa Barbara, his initial research on mechanisms of nitration, oxidation, nucleophilic substitution, and hydrolysis continued the Hughes and Ingold tradition. He also expanded into reactions involving carbocationic intermediates and reactivity-structure relationship in micelles. New methods of predicting and correlating reactivities in micelles and other self-assembling colloids were developed by Bunton and co-workers. Included was an electric field based theory to account for micellar effects on a number of anionic reactions. These results served as models for enzyme catalized reactions and have led Bunton to a major role in the development of bioorganic chemistry. He has advanced new applications of dynamic light scattering to probe colloidal interactions. Bunton and his co-workers have authored over 350 journal articles.

Our Tolman award winner has achieved worldwide recognition as attested to by his visiting professorships at the Universities of Buenos Aires, Santiago, Sao Paulo, Toronto, and Lausanne. He is a member of the Chilean Academy of Science and has been awarded an honorary doctorate by the University of Perugia, Italy. Bunton has also filled a major role as a teacher. As stated by Professor Robert A. Moss of Rutgers University: “Many of those now working in aggregate chemistry around the world have trained in his laboratory as graduate students, postdoctorates or scientific visitors. The extensive interest in micellar chemistry in South America is largely due to Bunton’s tireless work…” Another comment: “Bunton is generally supportive of young, developing scientists. His willingness to discuss other people’s research, and not in a cursory way, coupled with his broad knowledge and clear insight are a gift he has willingly shared with many of us.”

Abstract: Micelles of aqueous surfactants act as submicroscopic reaction media. Reactions occur at the micelle-water interface and the overall rate effects can be analyzed in terms of rate constants at the interface and the distribution of reactants between water and micelles. Micelles can control reaction products.