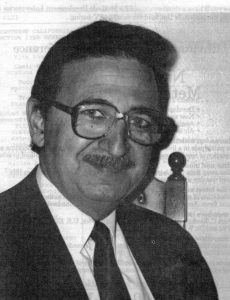 Professor Mostaf A. El-Sayed of the University of California, Los Angeles, received his B. Sc. from Ein Shams University in Cairo in 1953 and his Ph.D. from Florida State University in 1959. His education includes research fellowships between 1957 and 1961 at Yale, Harvard and Cal Tech. He has been on the faculty of UCLA since 1961. He has also held position as Visiting Professor at the American University of Beirut, Foreign Professor at the University of Southern Paris, Orsay, and the Sherman Fairchild Distinguished Scholar at Cal Tech. He has been Vice President of the Egyptian American Scholars since 1977 and President of the Arab Physical Society since 1979.

His awards include the Alfred P. Sloan Fellowship (1965-71), the John Simon Guggenheim Memorial Foundation Fellowship (1967-68), the Fresenius National Award in Pure and Applied Chemistry (1967), election to the National Academy of Sciences (1980), the Alexander von Humboldt Senior US Scientist Award (1982), the Outstanding Achievement Award of the Egyptian-American Organization of Southern California (1988), and the King Faisal Prize in Chemistry (1990).

Dr. El-Sayed has been Editor-in-Chief of the Journal of Physical Chemistry since 1980 and currently serves as the US Editor of the International Reviews of Physical Chemistry. Other public service activities include position on the editorial boards of Chemical Physics Letters, Chemical Physics, Account of Chemical Research and Nouveau Journal de Chimie. He has also served on numerous review committees for the Department of Energy, the National Science Foundation, the Office of Naval Research, and the Air Force Office of Scientific Research.

Professor El-Sayed is described as a world leader in laser applications to chemistry and photobiology, renowned for his research in laser spectroscopy, microwave-optical double resonance, multiphoton ionization spectroscopy, resonance Raman spectroscopy of transient species of biological importance, and for his seminal contributions to triplet state chemistry in the liquid and solid states. He has developed ingenious experimental techniques and applied them to a wide range of molecular systems including the biologically-interesting photochemical systems of bacteriorhodopsin and carbonmonoxyhemoglobin.

De. El-Sayed is further described as an excellent communicator, both as a teacher and in the presentation of his research results. His honors include the Distinguished Teaching Award at UCLA.

Professor El-Sayed’s enormous contributions to pure and applied science, his extensive service to the American Chemical Society and his outstanding public service record exemplify the objectives of the Tolman Medal.

“Laser Studies on the Solar to Electric Energy Conversion in the Other Photosynthetic System in Nature”
Dr. Mostafa El-Sayed, 1989 Tolman Award Winner

Abstract: There are two chromoprotein systems in nature that are capable of undergoing photosynthesis, chlorophyll (present in green plants) and bacteriorhodopsin (bR). Porphyrin molecules in the first and retinal molecules in the second are the solar energy absorbers and each is bound to its respective protein. In both, light energy is first converted electric energy in the form of proton gradients which are used at longer times to drive the chemical reactions leading to the formation of adenine triphosphate (ATP), the fuel of life on Earth.

My research group and I have embarked on extensive laser studies on the conversion of solar energy into electric energy in bR. In chlorophyll, the absorbed energy is first transferred, via its antenna, to a region in the plant called the reaction center in which both the conversion and the chemical reactions take place. One of the first questions we raised was whether or not bR has an antenna system like chlorophyll. By examining the direction of the maximum absorption of the first daughter formed after light absorption relative to that of the parent molecule, the conclusion was that, unlike chlorophyll, bR does not have an antenna.

The first step in the solar to electric energy conversion involves electron transfer in chlorophyll but there is a separation of a positively charged group (NH+) connected to the retinal from a negatively charged counter ion in bR. The transfer is accomplished by a change in the position of the NH+ group as the retinal isomerizes upon light absorption. By developing new laser techniques to analyze the scattered laser radiation from bR samples, we found that this process occurs in hundreds of femtoseconds.

The last step in the conversion of the solar to electric energy in bR is the creation of the proton gradients which occurs in 40 microseconds. In this time, the NH+ group loses its proton (H+). We have studied this process under different conditions, e.g., different temperature, solution composition, and pH for bR and its modified forms, e.g., without its metal cations or most of its lipids. Finally, we studied some of its mutants. From these studies we conclude that the deprotonation process is controlled by protein conformation changes which themselves are controlled by the interaction between the surface potential and the protein molecules within the active site.