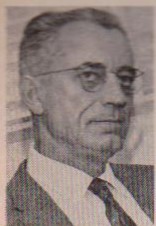 Francis Blacet received his B.A. (1922) and M.A. (1925) from Pomona College and his Ph.D. (1931) from Stanford University. He joined the chemistry faculty at UCLA in 1932, served as Chairman of the Department of Chemistry from 1948 to 1956, and as Dean of the Division of Physical Sciences until his retirement in 1966. He has long been active in photochemical research and as an advisor to governmental bodies on air pollution control.

“The Wonderful World of Photochemistry”

Abstract: A brief and somewhat historical review will be given of the basic concepts which set photochemistry apart in the minds of men from other subdisciplines in the broad field of chemistry. Included in this resume will be contributions by Richard C. Tolman.

Social Hour: Many UCLA chemistry alumni have generously contributed to sponsor a cocktail party during the social hour.

Reservations: Mail check for $8.75 per person to American Chemical Society, 1540 N. Hudson Avenue, Los Angeles, Cal. 90028. Late reservations may be made by telephoning Mrs. Levenstein at 469-7278 before 11 A.M. April 1, and payment will be accepted at the meeting. Non-members and guests of ACS members are welcome! Members are urged to bring spouses, friends and associates to this meeting. Use Grand Avenue entrance and take elevator to 5th floor to reach El Dorado Room.

The ninth recipient of the Richard C. Tolman Medal is to be honored for his many years of service in the practice of his profession – service to his students as an inspiring teacher, service to his university as a skilled administrator, service to the science of chemistry as a productive researcher int he specialty of photochemistry, and service to his community as a pioneer fighter against air pollution.

Born in Greenville, Illinois on February 25, 1899, Francis Blacet attended Greenville High School and James Millikin University. In 1920, he enrolled in Pomona College and received his B.A. degree in 1922. He was an Instructor at Pomona from 1922 to 1927. It was during this period that he met Kate Merrell and married her in 1924. With a twinkle in his eye, Professor Blacet likes to say: “and she’s been supporting me ever since”. The following year he received his M.A. degree from Pomona.

Francis went on to Stanford University as a duPont Fellow in 1930, and received his Ph.D. the following year. He then spent a year as an Instructor at Stanford before joining the chemistry faculty at UCLA, where he quickly rose through the ranks from Instructor to Professor. He served as Chairman of the Department of Chemistry from 1948 to 1956, and then as Dean of the Division of Physical Sciences until his retirement in 1966.

Over the years, Professor Blacet has taught many thousands of students the essentials of general chemistry and many hundreds more physical chemistry and photochemistry.. Many of them are now in key positions throughout the country, as are most of the thirty-odd research students trained by him. It is characteristic of his warmth and concern that he knows the address of everyone of his former research students, as well as of almost all of those with whom he worked at Northwestern and in the Canal Zone during the war. The impact of his character, abilities, and personality on those individuals is now multiplied enormously through their own interactions with many others.

When Dr. Blacet came to UCLA, there was no graduate school. When he retired, after 16 years of teaching and 18 years in key administrative roles, UCLA’s graduate schools were rated among the best in the world and had an enrollment of nearly 10,000. The strength of the Department of Chemistry is in large part due to the wisdom, good judgement and administrative skill of Francis Blacet and William G. Young – the first Tolman Medalist – who together guided it through most of its formative years. Dr. Blacet’s great strength as an administrator lies in his ability to judge people, his enormous fund of common sense, his ability to go to the heart of matters and cut through red tape, his humanity and modesty, his almost unrufflable manner and ready sense of humor in crisis, and his unique way of instilling confidence in those with whom he works.

Most of Professor Blacet’s research over a period of 30 years deals with quantitative studies on the mechanisms of the photolysis of simple organic molecules – chiefly carbonyl compounds. His work with butyraldehydes led to definitive evidence concerning their primary modes of decomposition and correlations with their absorption and fluorescence spectra. Among the techniques he developed and used was the Blacet-Leighton micro gas analysis apparatus. It was standard in the photochemical field for about two decades until it was supplanted by mass spectrometry and gas chromatography. Dr. Blacet has also played a key role in the development of new adsorbents for gas masks – one of them still in use – and in studies of means of dispersing various chemical warfare agents. 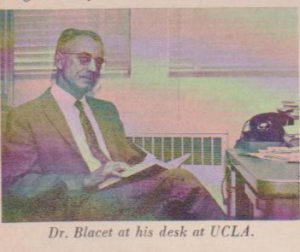 Because of his knowledge of the photochemistry of simple organic molecules and his strong desire to serve his community and nation, Professor Blacet has been an advisor on local and national air pollution problems for two decades. He has been a consultant to the Los Angeles County Air Pollution Control District since 1948. He has also served as a member of the Scientific Committee on Air Pollution and as a member of an advisory committee at UC Riverside’s Air Pollution Research Center.

Inspiring teacher, skilled administrator, eminent research chemist, public-spirited citizen – these are but some of the accolades to be bestowed on Dr. Francis E. Blacet at the nineth annual presentation of the Richard C. Tolman Medal by the Southern California Section of the American Chemical Society.

Dr. Blacet passed away on May 18, 1990. See his obituary on the University of California website.