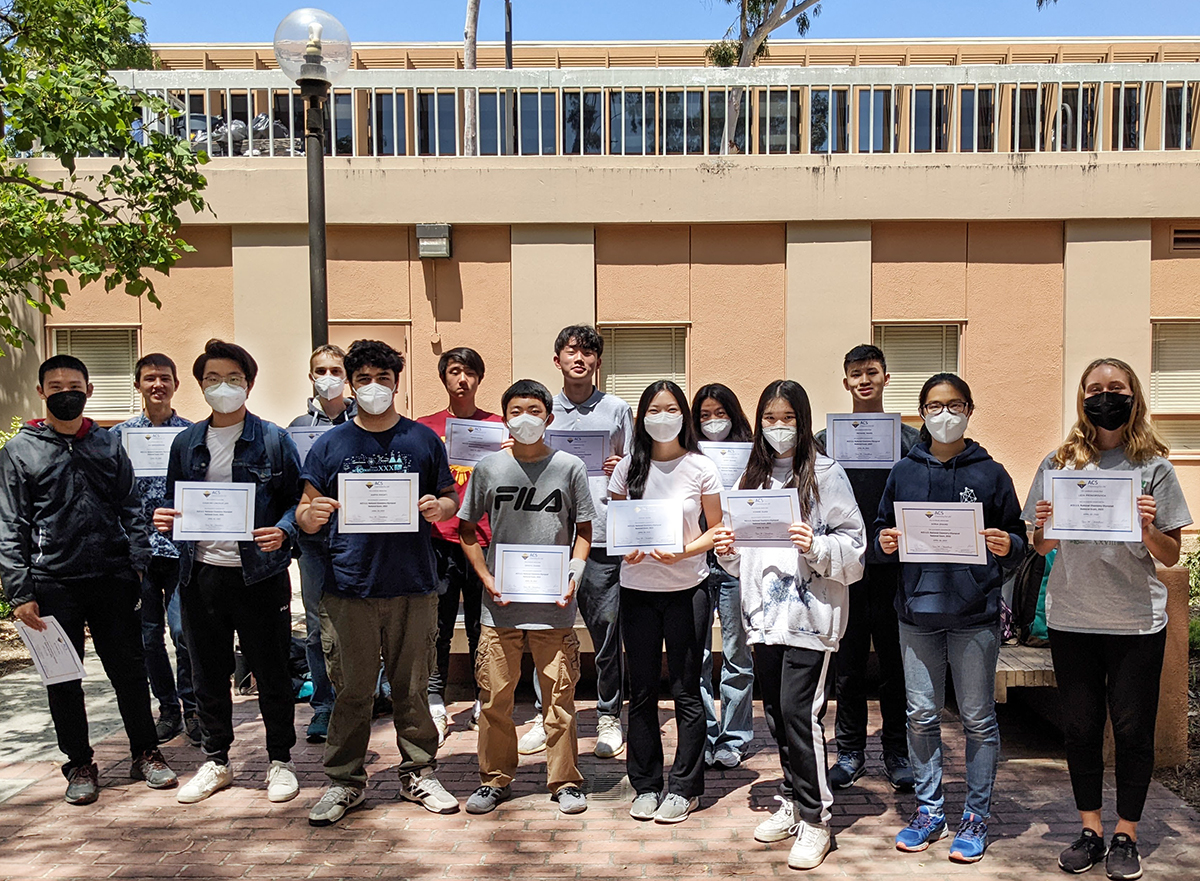 The 20 top-scoring students out of more than 1,000 participants from the National Exam will spend two weeks at the Olympiad Study Camp to undergo rigorous training. Based on their performance, four students are chosen to represent the U.S. at the International Chemistry Olympiad.

**********
The 2021 High School Olympiad
Due to the Covid 19 pandemic, ACS hosted the 2021 local section High School Olympiad on-line. This year, we had 332 students representing 29 high schools take the local Olympiad exam online through the National ACS Learning Center on Saturday, March 27, 2021. Arcadia and South Pasadena High Schools tied for first place overall while North Hollywood High School finished first for first year students. Sixteen students representing ten schools were invited to participate in Part I of the National Exam on April 17th online. The top 200 students nationally took Part II of the National Exam on April 24th. These students, as well as the top performers and teachers from each school with 10 or more participants, were honored at our virtual Educational Awards Presentation.

The 2020 High School Olympiad
The Great Isolation of the COVID-19 Pandemic almost caused the local section qualifying exam to be canceled, until a volunteer figured out how to hold the exam online in a secure environment. Nearly 780 high school students took this exam, and 15 of those top performers took the National ACS semi-finals exam, also in a virtual environment. Those students are:

Alex Dang, from Arcadia High School qualified to attend the virtual Study Camp. Four students from around the country were selected from there to go on to the virtual International competition at which the US Team won four gold medals.

On May 27, 2020, we were delighted to present our first virtual local section High School Chemistry Olympiad Awards Ceremony, in which we honored the top performers for the local qualifying exam, as well as those who went on to the semi-finals, finals, and the National Study Camp. Frances Arnold, Nobel Laureate, was kind enough to give the students a pre-recorded greeting, and Luis Echegoyan, 2020 ACS President, gave closing remarks. Those videos are shown below.

********************
The Southern California is pleased to announce that Albert Liu of North Hollywood High School has won a silver medal at the 2019 International Chemistry Olympiad in Paris in July. 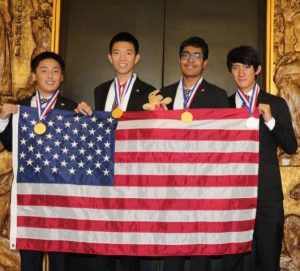 Here is the announcement from ACS:

The members of the team are:

More than 300 students from 80 countries competed this year.

Speaking with ACS’ newsmagazine Chemical & Engineering News, Ni says, “I think my favorite part about the competition is staying up at night just chatting with people. You learn a lot about people from other countries, and you discover that they’re also really passionate about chemistry — and you learn so much about them as people and as chemists.”

“Even though we all have different languages, different cultures, we can still all bond over chemistry,” Jin says.

Regarding the 100-degree temperatures in Paris recently, Liu says, “It’s been quite difficult handling the heat.”

Ravan enjoyed the opportunity to visit the Palace of Versailles. “I was impressed by how big and luxurious [Versailles] was,” he says. “I was totally blown away by it.”

ACS has sponsored the American team annually since the U.S. joined the Olympiad in 1984. Principal funding is through the ACS Donald F. and Mildred Topp Othmer Olympiad Endowment, with additional support from The Chemours Company; the University of Maryland at College Park, department of chemistry and biochemistry; Carolina Biological Supply Company; Macmillan Learning; Texas Instruments; Pearson; and Fisher Science Education. 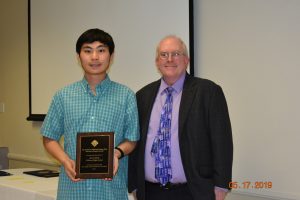 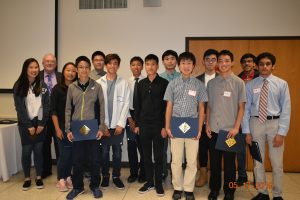 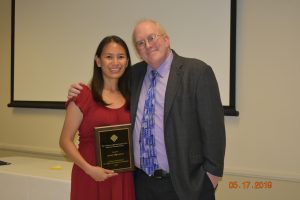 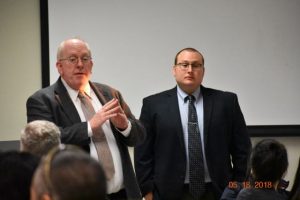 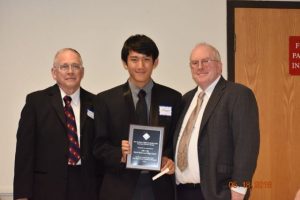 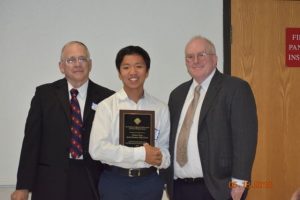 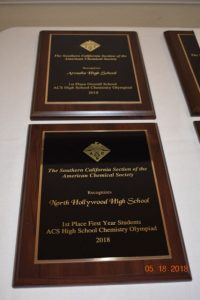 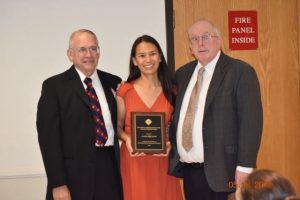 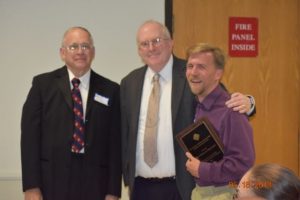 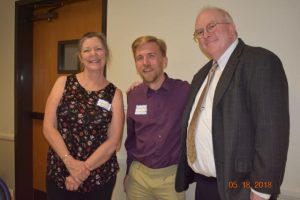 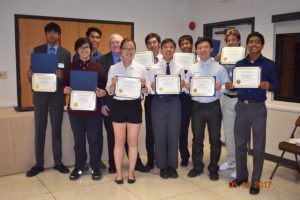 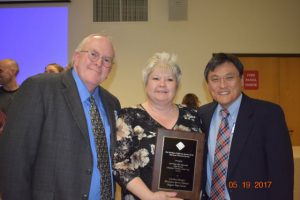 The top 20 national winners in the nation were invited to attend an all expenses paid two-week study camp, May 29th to June 13th, at the U. S. Air Force Academy in Colorado Springs, Colorado. At this camp, four finalists were selected from the U. S. Team to represent the United States in the 44th International Chemistry Olympiad (ICHO) in Washington, D.C. The Southern California Section is proud to announce that Timothy Man Hay Lee from Arcadia High School attended this camp and was selected as an alternate.

Let’s cheer as loudly for this Olympiad team as we do for those at the “other” Olympics in London! 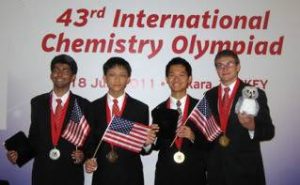 Joe Tung (pictured third from left in photo above) of Whitney High School in Cerritos and three US teammates all came home with medals from the International Chemistry Olympiad (IChO) in Ankara, Turkey in July, 2011.

A total of 273 students representing national teams from 70 countries gathered for the competition. Testing consisted of one day of laboratory work and a second day of written exams. Once judging was complete, gold medals were awarded to contestants who had the top 33 scores. Placing 24th in the overall ranking, Mr. Tung was also one of three students selected to give welcome addresses at the IChO opening ceremonies.

Joe Tung tied for first place in the 2011 local competition, in which 1346 students representing 32 high schools in Los Angeles County took the local exam.  The National Olympiad Exam was given to the 17 top Los Angeles students in April.   From the approximately 940 students that competed in the National Exam, 20 won places at the US team training camp in Colorado Springs. Four finalists and two alternates were selected from that group.