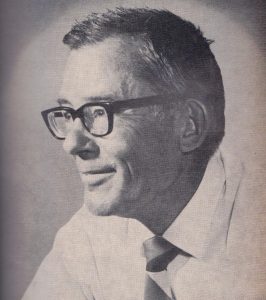 Dr. James Bonner was born the son of two chemists, Walter and Grace Bonner, and hence predestined to become a chemist (as were his five brothers and one sister). However, after receiving his AB in chemistry (as did his five brothers and one sister) he rebelled (just as kids do today) and entered the then unscientific field of biology. Chemistry and biology have, of course, since joined hands and become biochemistry. That’s his field. All of Dr. Bonner’s professional life has been at Caltech, a small place in which the individual can cause developments which he desires to actually happen. Rather than change institutions as so many do, he has changed research objectives and goals every eight to ten years. After some years spent on the study of plant hormones, auxins and wound hormones, he changed to the study of the path of synthesis of natural rubber. This has led to a continuing fruitful relationship with the government of Malaysia, the chief producer of natural rubber. Next, Dr. Bonner switched to the study of mitochondria, oxidative phosphorylation, and fractionation of subcellular particles, and finally in 1960 to the problem of how genes are turned off, and on, the problem of the development of higher organisms. All have been fruitful and interesting: the last is the best!

Early in his student days he had the opportunity to study with Richard Chase Tolman, perhaps the greatest teacher of his time at Caltech. From statistical mechanics to chromosomal biology, that’s Dr. Bonner’s scientific autobiography. During this period, he had the good fortune to have had some 60 graduate students receive their Ph.D. degrees with him; all good; some even better! To have good graduate students is perhaps the professor’s greatest good fortune and he is proud of them.

Award Address: A Chemical Biologist in the Real World

Abstract: My work for the past dozen years has been involved finding out how genes are caused to be expressed or not expressed (all of our different kinds of body cells have all the same genes). We have found out much about this matter, how the DNA of genes not expressed is complexed with a particular kind of protein, the histones, whose chemistry we have worked out. Probably, I will not be able to refrain from talking about these matters a little. However, the principal thing I wish to discuss is my work in trying to carry the fruits of chemical biology to real and relevant problems in the world of agriculture and industry. It is really possible for a chemical biologist to do good in the real world!

Reservations: Call Betty at 213) 469-7278 before noon Tuesday, April 10. Cost of the top sirloin steak dinner will be $6.50 with reservations; $6.75 without. If you do not wish to attend the dinner, you are most welcome to come at 8:00 for the Tolman Award presentation.

Mistele’s location atop the Crocker Citizens Building provides a luxurious atmosphere with a breath-taking view of the city lights in all directions.

A large gathering of members and guests of the Southern California Section were present to honor Dr. James Bonner as the Section’s Thirteenth Richard C. Tolman Medal recipient. The award meeting was held at Mistele’s atop the Crocker Citizens Building on April 11, 1973.

Dr. Norman Horowitz, Biology Department Head, Caltech, Pasadena, presented the recipient. During his presentation, Dr. Horowitz sketched Dr. Bonner’s background including his technical fields of physiology, biochemistry of plants, chromosomes, regulation of gene organization, population and natural resources. In addition to his extraordinary technical competence, Dr. Bonner is an accomplished mountain climber (he has conquered the peaks of Tibet) and skier (also a member of the National Ski Patrol). Dr. Morton Fainman, Post-chairman SoCal Section, then presented the Tolman Medal and award citation to Dr. Bonner.

In his award address, Dr. Bonner first reminisced his days at Caltech with Dr. Horowitz and Dr. Richard Tolman. He then spoke of his research on plants, plant hormones, factors influencing cell growth, chromosomes, polymerase, histones, and DNA. During World War II, our supply of natural rubber from Malaysia was cut off and Dr. Bonner was called in to solve the problem – biochemically. He explored the growth of rubber trees in the U.S., the production of synthetic rubber, and the pathways by which CO2 was converted to latex in rubber trees. Malaysia was interested in his work and Dr. Bonner became a consultant, working to increase production of rubber trees in that country. He then related his digression – find a way to mechanically harvest oranges in Florida. He accomplished this through chemical biology. He returned to the rubber trees with the knowledge acquired in the orange groves of Florida and proceeded to discover a way to greatly increase the latex production of rubber trees while decreasing the man hours of labor. Summarizing, Dr. Bonner emphasized the fact that chemical biology can do good in the real world.