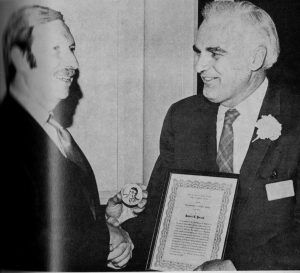 Abstract: It was once the analytical chemist’s dream to invent 92 specific reagents, one for each of the known chemical elements. Although the dream is largely come true, the field of separations (the antithesis of selective reagents) is more active than ever. Recent advances in gel chromatography illustrate the advantages of combining separations with selectivity.

The traditional sub-fields of chemistry have been crossed again and again at the graduate level. The UCLA sophomore course attempts to combine all fields of chemistry under a framework of chemical analysis. The ChemTeC Project is carrying this integration several steps further. Chemistry, from a practical point of view, is presented as a continuum. Neither the texts nor the courses are identified with any special part of chemistry. Some of these novel approaches will be useful for potential Ph.D.s as for technicians in training. Early exper4ience with pilot schools has shown that while a new approach may “turn on” the students, it may leave the instructor uncomfortable.

Finally, a few remarks on that overworked slogan, “Publish or Perish”. It is fast becoming “Publish AND Perish”.

Social Hour: Many UCLA chemistry alumni have generously contributed to sponsor a cocktail party during the social hour.

Non-members and guests of ACS members are welcome! Members are urged to bring friends, associates and/or spouse to this outstanding annual event.

To reach the El Dorado Room, use the Grand Avenue entrance, and take the elevator to the 5th floor.

Nearly a hundred members and guests of the Southern California Section were present for the Section’s eleventh annual Richard C. Tolman Medal award meeting on April 7, 1971. The meeting was held in the beautiful El Dorado Room of Los Angeles’ world-renowned Pavilion Music Center.

After a social hour, made possible by the generous contributions of many UCLA chemistry department alumni, Dr. Morton Z. Fainman, Chairman of the Southern California Section introduced the guests and made the appropriate announcements of forthcoming meetings. Among the guests were Dr. Pecsok’s mother, wife, six daughters, one son and three sons-in-law. Attending as an invited guest was Dr. Lloyd R. Snyder, Chairman of the Orange County Section.

Following a brief intermission, Chairman Fainman introduced Dr. Robert L. Scott, Chairman of the Chemistry Department at UCLA, who made the introductory remarks presenting the awardee, Dr. Robert L. Pecsok, to the meeting. Dr. Scott recalled his first association with Dr. Pecsok as a young member of the Boyleston Chemistry Club, of which Pecsok was president, when they were both graduate students at Harvard, anda continued with a number of anecdotes about their associations at UCLA during the past 23 years.

Chairman Fainman read the award citation and presented the Tolman Medal and certificate to Dr. Pecsok. The awardee was honored for his contributions to the field of analytical chemistry, particularly in the areas of polarography and chromatography; for his stimulating and inspiring teaching; for his leadership in transmitting the theory and application of gas chromatographic techniques to practicing chemists; for his creativity in developing chemistry and chemical technology curricula; and for his dedicated service to the chemical profession, at both the local and national levels.

He then briefly discussed old and new concepts of analytical chemistry. The old concept dreamed of a specific reagent for each chemical element. Modern technology requires much more than elemental analyses, however, and the new concept provides very sophisticated methods for the separation of discrete molecular species. Among the most powerful of these methods are gas chromatography and gel permeation chromatography.

Dr. Pecsok went on to describe the work that he has done in directing the ChemTeC Project and the way in which the resulting chemical technology curriculum can be used to train the chemical technicians our modern industrial society needs. He suggested that our traditional methods of educating chemists, too, may need restructuring. The present system is oriented toward producing research Ph.D.s and there is considerable evidence in the job market that this is not what industry needs.

The awardee’s talk was concluded with a few observations on the growth of the chemical literature. Under the slogan “Publish or Perish” we are inundated with too high a proportion of literature that is trivial or repetitious. We need a means of assessing the importance of the work before it is published, or we will soon “Publish AND Perish”.

Although it was not intended to be so, Dr. Pecsok’s address was something of a farewell to the Southern California Section. He is leaving UCLA to become Chairman of the Chemistry Department at the University of Hawaii in September. 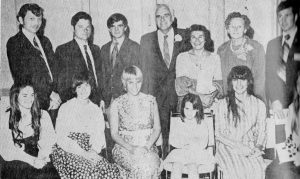 Dr. Robert L. Pecsok and his family at the Tolman Award Meeting, April 7, 1971