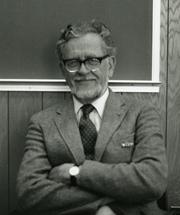 Presentation of the 15th Richard Chase Tolman Medal to Dr. John D. Roberts is an indication that the Tolman Award has come of age. It marks the first time that a mdealist is the student of a previous medalist. Dr. Roberts obtained his Ph.D. degree in 1944 from the University of California at Los Angeles as a student of Dr. William G. Young – the first recipient of the Tolman Medal in 1960.

Dr. Roberts is a rara avis, he is a native Los Angeleno reputed to have been born at the site of the present four-level freeway interchange in downtown Los Angeles. A graduate of Los Angeles High School, he finished his formal education at UCLA in 1944. Following a year spent at Harvard as a National Research Council Fellow, he moved to teach and to carry out research at MIT. In 1953, Dr. Roberts was appointed professor of organic chemistry at Caltech and immediately showed his no-nonsense approach to education by breaking the Institute’s sex barrier. One of the students he brought with him from MIT was a female; she was admitted as Caltech’s first woman graduate student. He served as Caltech’s Chairman of the Division of Chemistry and Chemical Engineering from 1963 to 1968, and now holds the title of Institute Professor of Chemistry.

Dr. Roberts, his wife Edith and his four children, are world-travelers as he has held visiting professorships and lectureships in Australia, Canada, England, Ireland, Israel, Japan, Mexico, Sardinia, Scotland, Switzerland, USSR, and West Germany. Besides golf, his non-chemical activities are skiing, sailing, and tennis.

Outstanding in research, Dr. Roberts also is a first-rate teacher. Many of his numerous graduate students, themselves, now are professors in chemistry.

The Citation: In recognition of his many contributions to fundamental organic chemistry in the study of: reaction mechanisms and kinetics, the chemistry of small-ring and medium-sized ring compounds, the use of proton nuclear magnetic resonance; for his structural determination investigations using deuterium and carbon-14, and for the structural elucidations and electronic distributions of biologically important molecules through the use of the magnetic resonances of carbon-13 and nitrogen-15; for his outstanding textbooks in organic chemistry, nuclear magnetic resonance, and molecular orbital calculations; for his efforts in chemical education at the California Institute of Technology as a stimulating teacher and example to his students; for his editorial and consultation services to professional journals, book publishers and the chemical industry; for his lecture-tours throughout the nation and the world; for his numerous committee memberships in the service to the American Chemical Society, the National Science Foundation, and the National Academy of Sciences.

Award Address: “What Will NMR Do For You Tomorrow?”

Abstract: The practice of chemistry in many areas has been revolutionized by the use of proton nuclear magnetic resonance (NMR) spectroscopy. The ease of the application, its nondestructive nature and the unique kind of information obtained have pushed NMR to the forefront of routine spectroscopic methods for liquids or solutions. Nonetheless, there have been gaps in the utilization of NMR – it has not been a high sensitivity procedure suitable for trace analysis and has been relatively little used for elements other than hydrogen and fluorine. Some of the progress that has been made in curing these deficiencies of the NMR method and which is coming to have very considerable repercussions in analytical, inorganic, organic, and especially biochemistry will be described, in the context of the almost breath-taking changes in the general practice of chemistry over the last three decades.

It is with great sadness that we learn that John D. (Jack) Roberts has passed away at the age of 98 on October 29, 2016. Prof. Roberts was the Institute Professor of Chemistry, Emeritus, at Caltech and former provost.

Roberts was a pioneer in the field of physical organic chemistry. He brought nuclear magnetic resonance (NMR) spectroscopy to organic chemistry, allowing chemists to determine the structures of complex biological molecules. He also used radioactive tracers to study the thermal rearrangements of small-ring hydrocarbons to better understand how the reactions work on a mechanistic level.

In addition to the Priestley Medal and the National Medal of Science, Roberts was the recipient of the Glenn T. Seaborg Medal (1991), the Chemical Pioneer Award of the American Institute of Chemists and the Arthur C. Cope Award of the American Chemical Society (both in 1994), the NAS Award in Chemical Sciences (1999), the NAS Award for Chemistry in Service to Society (2009), and the American Institute of Chemists Gold Medal (2013), among many other honors.

One of his key discoveries was of a transitional compound in organic reactions involving the carbon-containing ring called benzene. Roberts discovered in 1953 that benzene can be converted to a short-lived unstable compound named benzyne, in which two of the carbons in the six-membered ring are connected to each other by a triple bond.

“When he first proposed benzyne, nobody believed it. This is certainly one of his landmark discoveries,” says Harry Gray, Caltech’s Arnold O. Beckman Professor of Chemistry and founding director of the Beckman Institute. “Benzene goes to benzyne with a rearrangement of chemical bonds, and the chemical bonds that Jack Roberts proposed were really off the charts at the time.”

Back in the 1950s, long before magnetic resonance imaging (MRI) machines became a staple of orthopedic clinics, Roberts’s work with NMR revolutionized organic chemistry, enabling chemists to characterize the structure of organic molecules and to study rapidly equilibrating conformations, or shapes, of molecules in solution.

Roberts got his first exposure to the power of NMR spectroscopy on a 1954 consulting trip to the Du Pont chemical company, a firm with which he maintained a lifelong relationship. At Caltech, chemistry division chair Linus Pauling bought an NMR machine for Roberts for the study of organic compounds—the first such machine ever to be sold to a university. Through the years, Roberts helped develop more complex methods for NMR spectroscopy and ultimately was able to use the technique to obtain structural information for large biological molecules, such as steroids and enzymes.

A native of Los Angeles, Roberts was born on June 8, 1918. He graduated from Los Angeles High in 1936 along with his future wife, Edith. The two married in 1942. Roberts received both his bachelor of arts (1941) and his doctorate (1944) degrees from the University of California, Los Angeles (UCLA). Following positions at UCLA, Harvard, and the Massachusetts Institute of Technology, he came to Caltech in 1952 and became a professor of organic chemistry in 1953. In 1972, he was appointed Institute Professor of Chemistry and, in 1988, Institute Professor of Chemistry, Emeritus, and lecturer.

Roberts brought the first female graduate student, Dorothy Semenow, to Caltech when he moved from MIT in 1952. “He was very proud of opening a pathway for women students at Caltech,” says Jacqueline Barton, Chair in the Division of Chemistry and Chemical Engineering.

He published more than 540 papers and authored or coauthored 12 textbooks, including ABCs of FT-NMR and Basic Principles of Organic Chemistry. In 1990, he published his autobiography, The Right Place at the Right Time.

Prof. Roberts is survived by his four children—Anne, Donald, John, and Allen—as well as nine grandchildren and one great grandchild.