Skip to content
Congratulations to the 2017 Recipient of the
Richard C. Tolman Medal
Prof. Jeffrey I. Zink

Jeffrey I. Zink received his Bachelor’s Degree in Chemistry from the University of Wisconsin, Madison, his Ph.D. in Chemistry from the University of Illinois Urbana-Champaign, and is currently Distinguished Professor of Chemistry at the University of California Los Angeles.  He is a recipient of the Camille and Henry Dreyfus Teacher-Scholar Award, the Glenn T. Seaborg Award, the Herbert Newby McCoy Award, the Dow-Hanson Distinguished Teacher Award, the DOE Sustained Outstanding Research Award, the DOE Outstanding Scientific Accomplishment in Metals and Ceramic Sciences Award, and both an Alexander von Humboldt and a John Simon Guggenheim Fellowship. He was a Visiting Professor at the University College London, University of Paris VI, France, and the University of Amsterdam, Netherlands, and a Visiting Lecturer for the National Science Council Taiwan. He participated in ten of the ACS Speaker Tour programs in the late 1990’s. His research interests include excited state properties of large molecules, laser assisted chemical vapor deposition of nanoparticles and structures, multifunctional nanostructured materials, and nanomachines. He has over 550 publications in peer-reviewed journals and is a Thomson-Reuters Highly Cited Author.

Abstract: The subjects of this talk are multifunctional nanoparticles controlled by nanomachines for targeting, imaging and drug delivery in cells and in vivo. The nanoparticles are designed to 1) trap therapeutic molecules inside of nanocarriers, 2) carry therapeutics to the site of the disease with no leakage, 3) release a high local concentration of drugs, 4) release only on autonomous or external command, and 5) kill the cancer or infectious organism. The most important functionality is the ability to trap molecules in the pores and release them in response to desired specific stimuli. Two types of external stimuli will be discussed: light and oscillating magnetic fields. Activation by internal biological stimuli such as pH changes, redox potential changes and enzymes will also be presented. Molecular machines based on molecules that undergo large- amplitude motion when attached to mesoporous silica – impellers, snap-tops and valves – will be described. Derivatized azobenzene molecules, attached to the interior pore walls function as impellers that can move other molecules through the pores. Nanoparticles containing anticancer drugs in the mesopores are taken up by cancer cells, and optical stimulation of the impellers drives out the toxic molecules and kills the cells. Snap-tops with cleavable stoppers release cargo molecules when the stopper is removed from the pore entrance. Nanovalves consisting of rotaxanes and pseudorotaxanes placed at pore entrances can trap and release molecules from the pores in response to stimuli. Activation of these nanodevices by the five types of stimuli in solution, in living cells, and in animal models will be discussed. Applications to treatments of cancers (including pancreatic and breast) and of intracellular infectious diseases (including tuberculosis and tularemia) will be presented.

Cost: There is a choice of dinner entrees of Marinated Grilled Rib-Eye Steak with veal demi glaze, potatoes and asparagus ($44) or Pan Roasted Salmon with herbs and grilled asparagus ($48) or Moroccan Spiced Vegetable Tagine—Saffron couscous, squash, celery root, garbanzo beans and tomatoes ($38). All options include a hosted social hour, salad, dessert, wine with dinner and tax and tip, payable at the door with cash or check. Please RSVP to Nancy in the Section Office at office@scalacs.org by Monday, April 16, 2018.

Directions: For directions to the campus, use this link: http://www.ucla.edu/maps-directions-parking/. Parking is $12 for guest parking in Parking Lot 2 (just south of the Faculty Center). 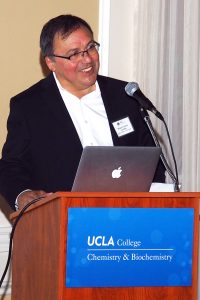 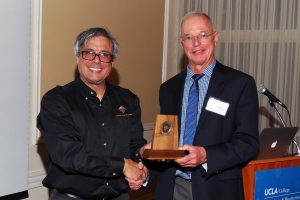 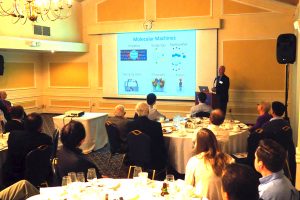 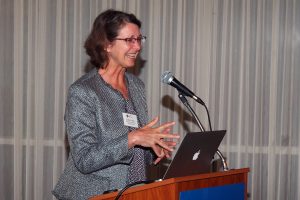 Professor and Chair of the Chemistry and Biochemistry Department, Catherine Clarke, gave the closing remarks. 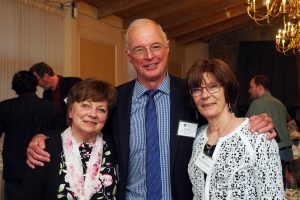 Professor Zink with his wife, Helo and sister Meredith Ghattas. 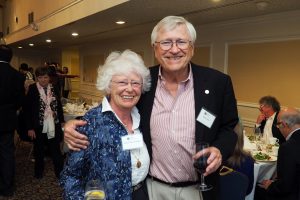 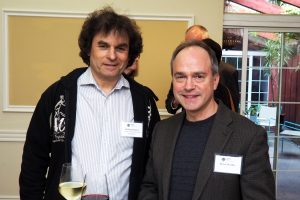 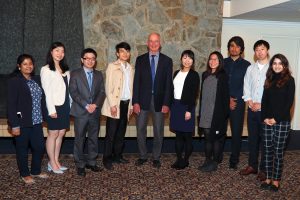 Professor Zink with his research group.

Over 65 people attended the Richard C. Tolman Award dinner at the UCLA Faculty Center on May 1, 2018 to honor Professor Jeffrey Zink. Dr. Robert de Groot, ACS Southern California Section Chair, presented the Tolman Medal to Professor Zink. In his address, “Multifunctional Mesoporous Silica Nanoparticles Controlled by Nanomachines for Biomedical Targeting, Imaging and Drug Delivery”, Zink discussed five types of his nanomachines and how they were used to treat infectious diseases and cancer. He highlighted his most highly cited “greatest hits” and shared the excitement of their discovery and applications.

Since 1960, the award has been given annually to Southern California researchers for outstanding contributions to chemistry. The honor is named for distinguished California Institute of Technology scientist Richard C. Tolman (1881–1948), who in 1917 famously showed that the electron was the charge-carrying particle in metals. A byproduct of this experiment was the measured value of the mass of the electron.

To learn more about Zink’s research, visit his group’s website: