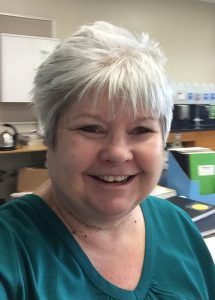 Ms. Morgan was born in Great Britain, but moved to Hong Kong at the age of 5 when her father took up a civil service posting with the Hong Kong Government. She attended elementary and high school in Hong Kong, eventually returning to England to attend University. Her Bachelor of Science (Hons) degree in Chemistry is from the University of Bristol, where her research field was Organic Geochemistry.

Ms. Morgan began her teaching career in London. After 8 years at Chiswick School, Caroline accepted an offer from Carshalton High School for Boys, and transferred to become Deputy Head of Science.
In 1982 she became affiliated with Chelsea College, this time as a mentor teacher for the Science teaching program. She supervised and mentored at least one student per year for the next 7 years.

In 1988 she applied to the US Information Agency Fulbright Fellowship program for a position as an exchange teacher. This resulted in a one year posting to Los Angeles.

After returning to London, fulfilling her contract with Carshalton High School, and waiting on seemingly endless immigration paperwork, she eventually returned to LAUSD, and Fulton Junior High School, with a permanent contract. After two years, she transferred to James Monroe Law and Government Magnet High school to teach AP Chemistry, Chemistry and Honors Physics.

When the opportunity arose in 2015, she applied for a transfer to Bravo Medical Magnet High School. This has led to a number of new experiences: real collaboration with fellow Chemistry teachers, launching the new AP Physics 1 class, and most fun (and time consuming) of all, helping to coach the myriad of Science teams that work out of the 5th floor at Bravo.

She has also presented at a number of conferences notably, for the last 5 years, at the American Chemical Society (Southern California) High School Chemistry Teachers Conference at Occidental College.